You know what they say: If you mess with the bull, you get the horns. Nobody understands that better than... 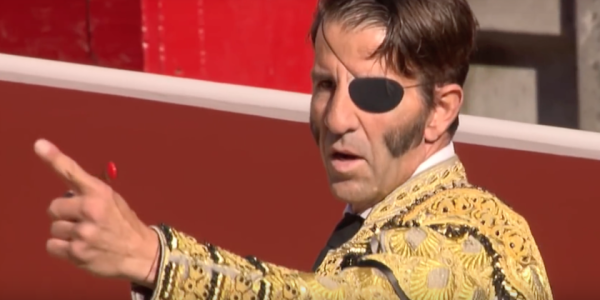 You know what they say: If you mess with the bull, you get the horns. Nobody understands that better than 43-year-old Spanish matador Juan Jose Padilla, whose left eye, which is made of glass, was dislodged from his skull by an angry bull on Saturday during a bullfight at the festival of Fallas in Valencia.

Why is Padilla’s eye made of glass? Because he lost his actual eyeball to another bull six years ago. That’s why they call him “The Pirate.”

Considering all that “The Pirate” has been through over the course of his long and glorious bullfighting career, one could say he was fortunate this time around. During the fight on Saturday, a bull struck Padilla with such tremendous force that his glass eye simply popped out. The footage is gruesome, but Padilla has experienced worse. Way worse.

In 2011, the horn of a massive bull plunged into Padilla’s jaw and emerged out of his left eye socket. With blood pouring out of his face, the matador was rushed out of the ring screaming, “I can’t see! I can’t see!” Padilla nearly died from his injuries, which left half of his face paralyzed. Five months later, Padilla returned to the bullfighting circuit (without an eye) for more.

Maybe you didn’t catch the goring that cost Padilla his first eye, but you still might recognize him from his second eyeball-related incident, which occurred in October. That time, a bull rammed its horn through Padilla’s eyepatch and straight into his eye socket, which happened to be devoid of a glass eye that day. “One-eyed bullfighter takes a horn to the eyehole,” read the headline in the New York Post.

So it’s no wonder that when Padilla lost his left eye again on Saturday, he got up and brushed himself off. Then, with a tourniquet applied to stop the blood gushing from his thigh, he killed the bull and removed its ear with a blade. “The Pirate” took his trophy with him to the hospital.

Check out the video of Padilla getting his eye hole rammed back in October 2016.