Last year, the world mourned the death of Harambe, the silverback gorilla shot by a zoo worker after manhandling a... 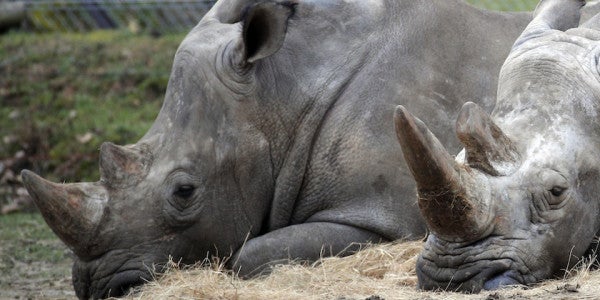 Last year, the world mourned the death of Harambe, the silverback gorilla shot by a zoo worker after manhandling a small boy who’d fallen into his enclosure at the Cincinnati Zoo. Now, he’ll be joined in the afterlife by another majestic beast slaughtered in captivity.

On the night of March 6, poachers broke into the Thoiry zoo on the outskirts of Paris and killed a four-year-old white rhinoceros. His name was Vince. They took his horn.

A keeper found Vince on the morning of March 7 with a bullet in his head. His large horn had been removed with a chainsaw, while his second horn was only partially severed. Authorities suspect the poachers had fled before they could finish the job because their equipment failed or, more likely, they’d been spooked.

The brazen murder of Vince, whom park director Thierry Duguet described as one of the zoo’s most popular attractions, raises the disturbing prospect that poachers are now shifting their attention to animal parks as untapped killing grounds as opposed to the wild. Authorities say this was the first time a zoo animal was poached in Europe.

To reach Vince, the poachers had to first force open a grill at the rear entrance of the zoo. They then broke through two locked doors until they arrived in the enclosure where Vince lived with two other white rhinos. “It’s possible the thieves didn’t have time to take the others,” a police spokesman told The Guardian.

An announcement posted on the Thoiry zoo’s Facebook page said that the “odious act” was carried out despite the presence of security cameras and five staff members who live on zoo grounds. The announcement explained that the keeper who found Vince’s body “was very attached to him and is deeply upset.”

A rhinoceros horn has an estimated value on the black market of between about $30,000 – $40,000 dollars, according to The Guardian. Detectives say there’s an established trade network in illegally poached horn between France and Asia, where the horn of the white rhino is believed to have aphrodisiacal qualities.

“Animal parks throughout Europe have been put on alert to look out,” Paul de La Panouse, a former historic director of the African enclosure at Thoiry zoo told French journalists. “It’s not easy to kill a rhino weighing several tons just like that. It’s a job for professionals.”

White rhinos are an endangered species mainly found in Uganda and South Africa, where they’ve been poached extensively. Only an estimated 21,000 still exist in the wild.