What the MCL lacks in terms of deadly force, it certainly makes up with intimidation 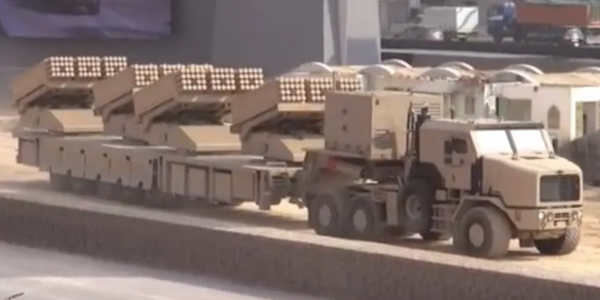 There's a quote from “Iron Man” that's always stuck with me. “They say that the best weapon is the one you never have to fire,” quips Tony Stark while unveiling his badass new Jericho missile to the U.S. military, mere hours before the ambush that will eventually lead him to develop the Iron Man suit. “I respectfully disagree. I prefer the weapon you only have to fire once.”

Well, I respectfully disagree: How about the weapon that you can fire 240 times in under two minutes?

Here's a video of this mean, lean, rocket-launching machine in action:

There are limits to the MCL's combat effectiveness, of course: PopMech points out that the semi-trailer configuration offers limited mobility on inhospitable terrain, and the TRB-122 rockets have a range of just over 22 miles at sea level, meaning the MCL is hauling short-range missiles with a relatively limited payload.

Still, what the MCL lacks in terms of deadly force, it certainly makes up with intimidation: