Trump Looks To A Marine General To Oversee The Secret Service

It looks like President Donald Trump will add yet another Marine Corps general to his team. Politico reports that retired... 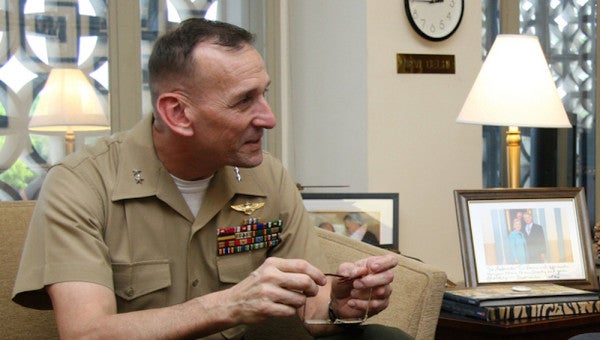 It looks like President Donald Trump will add yet another Marine Corps general to his team.

Politico reports that retired Marine Maj. Gen. Randolph Alles, currently a deputy with U.S. Customs and Border Protection, is Trump’s choice to head up Secret Service, according to an official with knowledge of the selection process. Alles will replace former director Joseph Clancy, who retired on March 4.

Alles previously worked as the CBP’s acting executive assistant commissioner of enterprise services. Prior to his career with the federal bureaucracy, Alles spent 35 years in the Marine Corps before retiring in 2011. An aviator, Alles logged more than 5,000 flight hours in multiple aircraft types, including more than 300 combat hours. He led multiple commands in Iraq — including Third Marine Aircraft Wing — with his final Marine Corps assignment serving as the Director for Strategic Planning and Policy at the U.S. Pacific Command.

The choice of a former Marine seems geared to assert discipline on an agency marred by scandal in recent years. In March, a White House fence-jumper incident that cost two agents their jobs. During that same month, one of the agents on the Vice President Mike Pence’s detail shirked his duty for a rendezvous with a prostitute. Under former President Barack Obama, the Secret Service dealt with an armed shooter in the White House in November 2011, the removal of eight officers for soliciting prostitutes in Colombia, among other scandals.

Despite this, this decision to select a director from outside the ranks Secret Service is not popular among current agents. Every head of the Secret Service since James Joseph Rowley, chief for presidents John F. Kennedy, Lyndon Johnson, and Richard Nixon, was previously a member of the elite federal law enforcement agency.

“Imagine taking a guy from USDA and moving him over to be the commandant of the Marine Corps,” Bill Pickle, a former deputy assistant director of the Secret Service, told Politico. “They're totally different jobs.”

But the nearly two-month absence of a permanent director was reportedly impacting morale, which in turn could erode security.

“The reason is when you start taking a look at what could go wrong on your watch, the last thing you want is for something to happen to the president,” O'Carroll told Politico.

If selected, Alles will be charged with building up the Secret Service’s operational capacity as the agency faces an unprecedented strain in protecting the many members of the Trump clan. Facing operational challenges and low morale, Alles will have to rise to this challenge while contending with his position an outsider in a close-knit agency. But, as we’ve seen so far, the Marine generals serving in Trump’s administration are more than up to the task.