U.S. service members with Vice President Mike Pence’s communications team during a visit to Panama were removed from their duties... 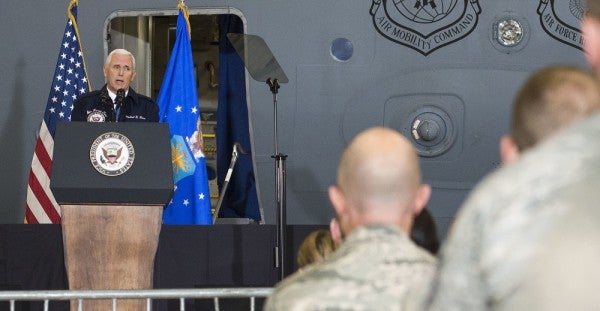 U.S. service members with Vice President Mike Pence’s communications team during a visit to Panama were removed from their duties after they were caught on a security video bringing women back to their hotel in Panama, NBC news reported on Aug. 24.

The communications detail, which included senior military personnel from the Army and one from the Air Force, failed to officially register the women when they returned to the hotel, unnamed defense officials told NBC News.

White House officials said that the Pence’s staff became aware of the breach in protocol when they observed footage from hotel security cameras of the service members bringing women into a secure area. After the allegations emerged, the service members involved were sent back to the states and removed from the communications detail, NBC New reports.

“We are aware of the incident and it is currently under investigation,” Air Force spokesman Col. Patrick S. Ryder told NBC News. “We can confirm that the individuals in question have been reassigned back to the Army and Air Force.”

Pence was still in the U.S. when the incident occurred. The vice president traveled to Colombia last week in an official trip that included visits to Chile, Argentina, and Panama, reports the Huffington Post.

While government officials told NBC News that there “is no indication at this point that the women who were brought to the hotel were prostitutes,” the incident is the latest in a number of scandals involving security and military details in Latin America.

In May, reports emerged that three married Marine Corps officers were drugged, robbed, and sent to a local hospital after a pub crawl in Bogotá, Colombia went awry. One of the officers allegedly withdrew cash from a government travel card to pay for two prostitutes he brought to his room, while two other officers took women back to their rooms. The men reportedly blacked out and were robbed of U.S. property, including government-issued laptops and iPhones.

Another high-profile scandal broke in May 2012, when 11 Secret Service agents and as many as 10 military service members assigned to President Barack Obama’s detail brought prostitutes to their hotel during a trip in Cartagena, Colombia, according to a June 17, 2012 Reuters report. The fallout from the incident resulted in 11 Secret Service agents being placed on administrative leave.