The Navy doesn’t like being lied to, especially when it comes to fitness scores. And Master Chief Hospital Corpsman Rachel... 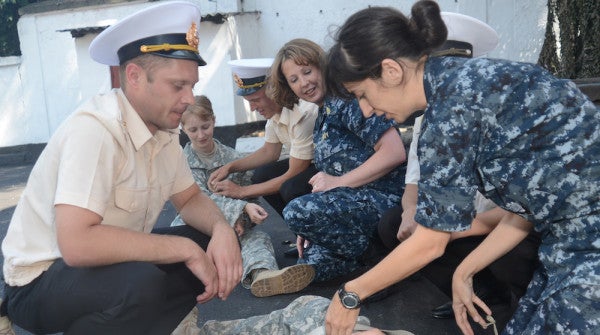 The Navy doesn’t like being lied to, especially when it comes to fitness scores. And Master Chief Hospital Corpsman Rachel Watson learned firsthand what branch officials will do if you try to fudge sailors’ physical readiness assessment scores.

Watson was removed from her post as the senior enlisted advisor of the Jacksonville, Florida-based Navy Cargo Handling Battalion 11 after allegedly requesting that several sailors’ scores be updated in the Navy’s Physical Readiness Information Management System, Navy Times reported.

An unnamed official told the publication that Watson’s corrections were discovered by another sailor in the unit’s chain of command, which led to an investigation.

This isn’t the first time a naval staff member has been implicated in a PRT scandal.

In 2015, recruit division commanders at Navy Nuclear Power Training Command in Charleston, South Carolina, reportedly told new sailors to lie about or cheat on the PRT.

“Of 100 sailors surveyed by Naval Nuclear Power Training Command, 42 reported that their RDCs and other RTC staff had told them, explicitly or by implication, to cheat on the PRT,” Navy Times reported.

Up to this point, Watson has had a decorated career in the Navy. She enlisted in 1989 and has earned an Army Commendation Medal, two Meritorious Service Medals, three Navy and Marine Corps Commendation Medals, and four Navy and Marine Corps Achievement Medals, according to Navy Times. She was made a master chief in 2013 and became a command master chief two years later.

So far, the Navy has not explained the reason for Watson’s decision to alter PRT scores. Lt. Cmdr Cate Cook, spokesperson for Navy Expeditionary Combat Command, also told Navy Times that she is unsure what disciplinary measure will be taken in Watson’s case.

Task & Purpose reached out to Navy Expeditionary Combat Command for a comment and will update this story as more information becomes available.