A Texas Veteran Reportedly Shot Himself At A VA Medical Center. He Wasn’t The First

On the morning of July 26, police were dispatched to the Thomas E. Creek Medical Veterans Affairs Medical Center in... 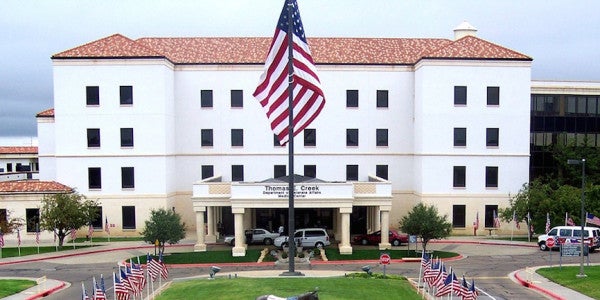 On the morning of July 26, police were dispatched to the Thomas E. Creek Medical Veterans Affairs Medical Center in Amarillo, Texas. When they arrived, they found a 75-year-old veteran had shot himself in the parking lot.

“This morning, a veteran took his life in the front of the main hospital of the Thomas E. Creek VA Medical Center,” Barbara Moore, Chief of Community and Patient Services for the hospital, said in a press statement shortly after. “Our deepest condolences are extended to friends and family of the veteran. We are cooperating with local authorities on the investigation.”

The veteran’s name has not yet been released.

This tragedy is just the latest in a string of veteran suicides in VA parking lots in recent years. In March, a 63-year-old veteran was found dead of apparent suicide in the Durham Veteran Affairs Medical Center parking lot by VA police. Another veteran, 53, took his own life in the parking lot of the Department of Veterans Affairs Phoenix Regional Office in December 2016. And in August 2016, a 76-year-old veteran was found deadofanapparentsuicide in the parking lot of the Northport Veterans Affairs Medical Center on Long Island.

“They spend millions and millions of dollars on suicide prevention but it doesn’t reach down to boots on the ground,” James Alston, who runs the Triangle Veterans Outreach Center in Durham, told WNCN in the wake of the March suicide.

As for why these veterans chose VA parking lots, little is known.

“We urge veterans experiencing a crisis, as well as their family members, to contact the Veterans Crisis Line at 800-273-8255 (press 1),” Moore said. “This line is available 24 hours a day, seven days a week.”

We reached out to the VA, and a spokesperson said that it's a problem, but added that resources are available for suicidal veterans in need.

“Any time a Veteran takes his or her own life it is a tragedy; that is why VA has made suicide prevention its top clinical priority and is working hard to provide timely access to care for Veterans in need,” the spokesperson told Task & Purpose. “Same day services are available to any Veteran in crisis.”