In his first “state of the VA” address at the White House on May 31, Veterans Affairs Secretary David Shulkin... 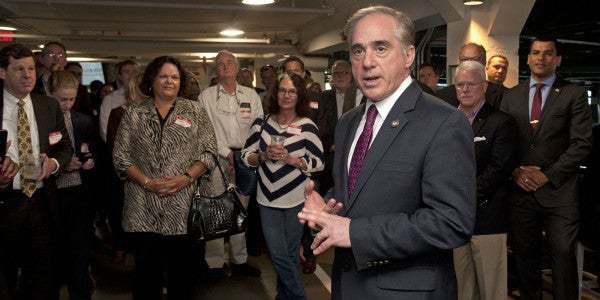 In his first “state of the VA” address at the White House on May 31, Veterans Affairs Secretary David Shulkin highlighted his department’s focus on wait times, accountability, quality of care, and veteran suicides. But it may have been one brief answer to a question after his speech that really signaled Shulkin’s openness to radical reforms for veteran health care.

Asked whether his emphasis on improving veteran mental health and preventing suicides meant he was considering an American Legion proposal to decriminalize marijuana and study the drug as a medicine, Shulkin responded: “I hope the people take a look at that.”

“Right now, federal law does not prevent us at VA to look at that as an option for veterans,” he told the assembled crowd of journalists, but he emphasized that any policy change would have to come from lawmakers. Pressed by a reporter on his opinion toward pot as a trained physician, Shulkin praised several states’ careful decriminalization and regulation of medical marijuana.

“There may be some evidence that this is beginning to be helpful, and we’re interested in looking at that,” he said.

The American Legion, a 2.5 million-member veterans service organization that’s never been known for social liberalism, has vocally lobbied for medical marijuana research for some time, issuing two national resolutions on the issue and pressing the White House for meetings on medicinal pot for several weeks.

“There is overwhelming evidence that it has been beneficial for some vets,” Louis Celli, the Legion’s national director of veterans affairs and rehabilitation, told Politico on May 20. “The difference is that it is not founded in federal research because it has been illegal.”

“Many Afghanistan and Iraq veterans have contacted the American Legion to relay their personal stories about the efficacy of cannabis,” for a variety of physical and emotional maladies, Celli and Plenzler wrote. “This is why the 2.2 million members of the American Legion are calling on the Trump administration to instruct the Drug Enforcement Agency to change how it classifies cannabis.”

How committed Shulkin is to marijuana research remains to be seen. In his speech, he outlined 13 major areas of improvement for the VA and how to get there. His plans include expanding same-day mental-health and primary-care services for vets at more facilities; getting more firing power over VA employees with congressional legislation; freeing more funds for vet care in the private sector; selling off vacant and underutilized VA property; and modernizing the department’s aged IT infrastructure — an initiative that the secretary said would require an additional funding request from Congress, over and above the Trump administration’s proposed VA budget.

But Shulkin’s highest priority, he said, was reducing veteran suicides, even among vets who weren’t in VA care, and he used his address to announce the launch of a summer campaign by the department to tackle suicides.

While it’s possible cannabis could play a role in that effort, Shulkin acknowledged that the ball’s not entirely in his court.

“Until such a time that federal law changes,” he said, “we are not able to prescribe medical marijuana.”