If You’re A Vet In California, Here’s How The New Marijuana Laws May Affect You

Well, it’s official, the sale and use of recreational marijuana is now legal in the Golden State. With the 2016... 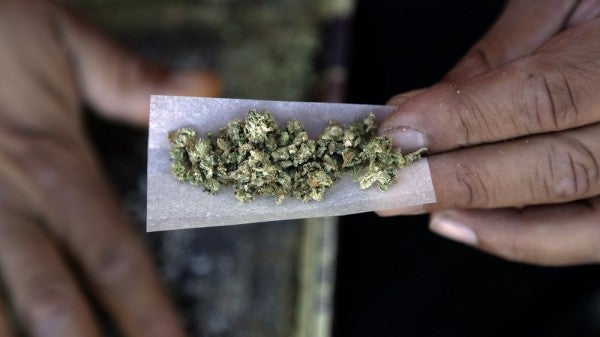 Well, it’s official, the sale and use of recreational marijuana is now legal in the Golden State.

With the 2016 passage of Prop. 64, Californians voted to legalize the sale of marijuana to anyone over the age of 21, small-scale personal grow operations, and the possession of up to one ounce of pot. As of 2018, the state’s recreational pot market is now open for business, but for the 1.7 million veterans who call California home, this raises some questions.

Though veterans overwhelmingly support medical marijuana research, the drug remains illegal at the federal level — and considering that the Veterans Health Administration provides medical care to some 9 million veterans, this can place those patients in the middle of the state versus federal debate over pot use.

With an eye toward how to safely, and legally, blaze now that California’s gone green, here’s what you need to know:

Where and when can I buy legal weed?

While recreational pot is legal across the Golden State, would-be pot purveyors can’t set up shop just anywhere, as a number of cities — such as Bakersfield, Fresno, and Riverside — have banned the sale of recreational cannabis, according to USA Today. However, you can still travel out of town to buy your weed, or grow up to six plants at home for personal use.

Roughly 90 retailers have received licenses so far to begin selling recreational cannabis — though not all of them will start right away, due to hang-ups getting city ordinances passed in time, USA Today reports. Currently, the majority of licensed weed retailers are concentrated in San Diego, Santa Cruz, the larger San Francisco Bay Area, and Palm Springs.

Additionally, recreational cannabis cannot be sold between the hours of 10 p.m. and 6 a.m. — which may put a damper on those late-night plans of a post-bar bong hit.

How much pot can I buy?

Depends, how much cash do you have in your bank account? That’s the major limit — well, that and how much you can walk around with: One ounce of marijuana, or 8 grams of cannabis concentrates.

But the cost is a big prohibitor, considering that state and city sales taxes are expected to raise the price of cannabis by more than one third, the Los Angeles Times reports. (While those who buy from medical cannabis dispensaries will get a break on sales taxes, they can still expect to see a price increase by as much as 25% in some cities.)

Okay, but what about my guns?

While weed may be legal in California, cannabis remains a Schedule 1 substance under federal law — “drugs with no currently accepted medical use and a high potential for abuse,” according to the Drug Enforcement Administration. So, when it comes to owning a firearm, “California’s recreational market makes absolutely no difference on the restrictions on gun ownership,” David Mangone, a legislative analyst with Americans for Safe Access, told Task & Purpose in an email. “When there is a federally licensed firearms sale (which includes sales at gun shows) a dealer can’t sell to anyone using a controlled substance.”

This dates back to a 2016 ruling from the California-based U.S. Court of Appeals for the Ninth Circuit Court, which upheld that a Nevada gun store owner had the right to prohibit a medical cannabis card-holder from buying a firearm, according to LA Weekly. Because of cannabis’ classification as Schedule 1, users are federally prohibited from purchasing a firearm.

“Language appearing on [Bureau of Alcohol, Tobacco, Firearms and Explosives] forms indicates ‘the use or possession of marijuana remains unlawful under federal law regardless of whether it has been legalized or decriminalized for medicinal or recreational purposes in the state where you reside,’” Mangone told T&P.;

In short, if you’re looking to buy a new firearm and there’s a box on a federal form that reads “Are you an unlawful user of, or addicted to, marijuana?” and you check, “yes,” then you won’t be able to purchase that gun.

Will smoking pot recreationally cause problems at the VA?

On Dec. 8, the Department of Veterans Affairs passed new guidance designed to encourage an open and honest discussion between doctors and patients who use state-legal medical cannabis.

Related: VA Doctors Are Now Cleared To Talk About Medical Marijuana With Patients »

The new policy still bars physicians with the Veterans Health Administration — the VA’s medical arm — from recommending or prescribing cannabis, but it gives doctors the all-clear to take a veteran’s pot use into account when it comes to mapping out a treatment plan. (Task & Purpose previously detailed the new policy, as well as the series of loopholes and grey areas it shored up.)

“By encouraging doctors to bring it up in discussions both from a medical and recreational standpoint it will at the very least give patients an opportunity to discuss their use without some of the existing apprehension,” Mangone said.

One major aspect of this policy is that care providers can take a patient's weed use into account when it comes to a narcotics agreement — a contract which mandates that a patient submit to a urinalysis in order to receive a narcotics prescription. Under the new policy — VHA Directive 1315 — veterans and their care providers can account for their pot use, meaning, on a case-by-case basis, doctors and patients can reach an agreement so that screening positive for medical pot won’t result in having their other prescriptions cut off or curtailed.

However VHA Directive 1315 only applies to patients in state-run medical marijuana programs, and at this point, it's unclear how recreational pot use will figure in to those conversations with care providers — and whether recreational smokers will be granted the same flexibility, say in the case of a patient self-medicating with recreational weed to help with sleep or pain. California was also the first of 29 states, not including the District of Columbia, Guam, and Puerto Rico, to legalize medical cannabis.

“Now, the guidance specifically states that VHA benefits won’t be denied for an individual’s participation in a state medical cannabis program but remains silent about recreational use,” Mangone told Task & Purpose. “Currently, I think you’re going to see recreational users continue to be denied benefits particularly for anyone in narcotic agreements which obviously creates issues for vets.”

If you’re a veteran in California and have talked to your VA doctor about using marijuana recreationally, I’d love to hear about it. Email me at James@taskandpurpose.com.