2017 has been an exciting year. We saw a former Army three-star general and White House official go down in... 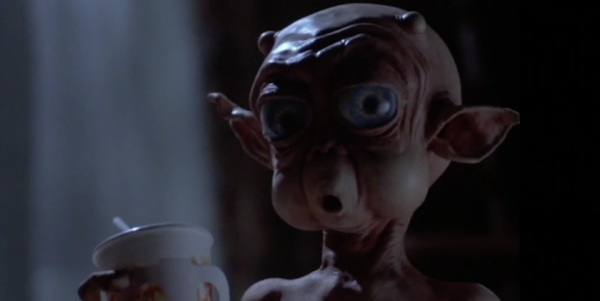 2017 has been an exciting year. We saw a former Army three-star general and White House official go down in flames for cozying up to Moscow; the swift and brutal destruction of the Islamic State’s pseudo-caliphate in the Middle East; escalating tensions with nuclear-armed North Korea; and another Star Wars movie. But don’t put the popcorn away just yet — because somehow, someway, 2017 just got even cooler.

A former Pentagon official told CNN on Dec. 18 that he believes there is evidence that extraterrestrial life has already touched down on Earth. This isn’t just some stuffy, old, run-of-the-mill former Pentagon official. This is Luis Elizondo, who led the Advanced Aviation Threat Identification Program — the existence of which was a top secret until just a few days ago, when The New York Times revealed that the Department of Defense spent $22 million investigating reports of unidentified flying objects between 2007 and 2012.

“My personal belief is that there is very compelling evidence that we may not be alone,” Elizondo said last night on CNN’s Erin Burnett OutFront. “These aircraft — we’ll call them ‘aircraft’ — are displaying characteristics that are not currently within the U.S. inventory nor in any foreign inventory that we are aware of.”

The New York Times report included footage from two U.S. Navy F/A-18 Super Hornets of a mysterious flying object that was taken in 2004 off the coast of San Diego. One of the pilots, retired Cmdr. David Fravor, characterized the UFO to CNN as a “40-foot-long Tic Tac with no wings” (yum!). Fravor’s four-person sortie chased the flying Tic Tac for several minutes as it hurtled through the air, rotating and shifting directions willy-nilly — “like what you could do with a helicopter,” he said, “but more abrupt.”

The Advanced Aviation Threat Identification Program was started in 2007 at the request of then-Senate Majority Leader Harry Reid, the Nevada Democrat, to investigate sightings of what The New York Times described as “aircraft that seemed to move at very high velocities with no visible signs of propulsion, or that hovered with no apparent means of lift.” Fravor’s filmed encounter was one that officials with the program studied.

The program was shuttered in 2012, according to Pentagon officials, but Elizondo told The New York Times that it kept trucking along — just without government funding. In fact, Elizondo said he continued researching U.F.O.s with CIA and Navy officials until October 2017, when he resigned from the Pentagon to protest “excessive secrecy and internal opposition.” Some of that opposition was fueled by the fact that most of the program’s $22 million budget went to an aerospace research company owned by Reid’s longtime friend, billionaire believer-in-aliens Robert Bigelow.

However, not everyone believes. Among the most vociferous skeptics is Ryan Alexander of Taxpayers for Common Sense, who told CNN that “it’s definitely crazy to spend $22 million to research U.F.O.s.” She added, “Pilots are always going to see things that they can’t identify, and we should probably look into them. But to identify them as U.F.O.s, to target U.F.O.s to research — that is not the priority we have as a national security matter right now.”

Fravor disagrees. It’s been 13 years since he and his comrades chased a U.F.O. over the chilly blue waters of the Pacific, and he remains as certain as ever that what they witnessed is worthy of the Pentagon’s serious attention. “I think it’s real, because I saw it,” he told CNN. “What if there’s more of these and we do nothing?”

Reid, who retired from Congress this year, shares Fravor’s frustration over the Pentagon’s decision to shut down the Advanced Aviation Threat Identification Program.

“I’m proud of this program and its ground-breaking studies speak for themselves,” Reid said in a statement to CNN on Dec. 18. “It is silly and counterproductive to politicize the serious scientific questions raised by the work of this program, which was funded on a bipartisan basis.”

But don’t let Reid fool you. The 78-year-old former father of five has a silly side, which was on full display on Dec. 16 when he incorporated a touch of classic dad humor into an otherwise earnest tweet about the possible existence of space-people. Behold:

The truth is out there. ?