The US military is not the silver bullet in the fight against the coronavirus, Pentagon officials say

Calling out the military to fight the coronavirus sounds like a good idea, but the Defense Department only has so many doctors and hospital beds to help. 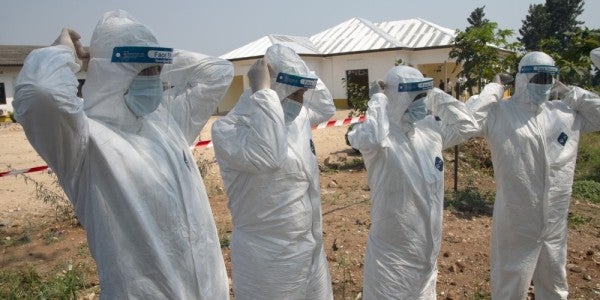 Despite some calls to mobilize the U.S. military in response to the coronavirus crisis, the Defense Department does not have many hospital beds to spare, defense officials said on Monday.

Former Vice President Joe Biden, the presumptive Democratic nominee in this November’s presidential election, has said the coronavirus outbreak is “like a war” that requires a massive government response.

“I would call out the military, now,” Biden said during Sunday’s presidential debate on CNN. “They have the capacity to provide the surge help that hospitals need – and is needed across the nation. They’ve done it. They did it in the Ebola crisis. They’ve done it. They have the capacity to build 500-bed hospitals in tents that are completely safe and secure.”

But the U.S. military’s tent hospitals are designed to treat combat casualties, said Air Force Gen. Paul Friedrichs, the top medical advisor to the chairman of the Joint Chiefs of Staff.

“We don’t have any 500-bed hospitals designed for infectious disease outbreaks,” Friedrichs said during a Monday Pentagon news conference.

The Defense Department has a total of 36 hospitals inside the United States; however, they are relatively small facilities, he said.

In fact, only 2 or 3% of the hospital beds in the United States are in Defense Department facilities, said Pentagon spokesman Jonathan Hoffman.

The Defense Department also has a limited number of medical personnel to staff tent hospitals, Hoffman said. Those doctors, nurses, and other medical professionals would have to come from existing facilities, the National Guard, and the Reserves.

A disadvantage of mobilizing the Guard and Reserves to treat coronavirus is the Defense Department would be taking those medical personnel away from civilian hospitals, Friedrichs said.

“Whether it’s a natural disaster or the coronavirus or anything else, that’s part of the tradeoff that we look at as we offer options going forward,” Friedrichs said.

While the U.S. military has two hospital ships that is has deployed for humanitarian relief missions, they are intended to treat trauma patients, not an infectious disease patients, Hoffman said.

“You have litters that are stacked floor to the ceiling with individuals,” Hoffman said. “You have open bay rooms.”

With that said, hospital ships could be used to augment civilian hospitals by taking trauma and emergency room patients, Friedrichs said. The limiting factor with that option is it would be difficult to get a hospital ship somewhere in the middle of the country, such as St. Louis.