A female sergeant with the British Army’s Special Reconnaissance Regiment is being lauded as the U.K.’s “GI Jane” after reportedly... 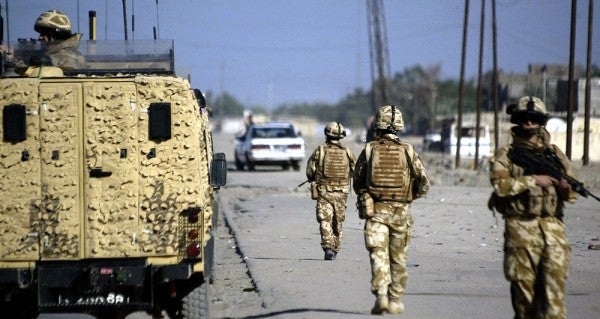 A female sergeant with the British Army’s Special Reconnaissance Regiment is being lauded as the U.K.’s “GI Jane” after reportedly killing at least three Islamic State militants in a town near the Syria-Iraq border after an intelligence mission went awry in September, according to the Daily Star.

The woman — who was not identified in the original Daily Star report — was on a team with Special Air Service (SAS) troops, SRR personnel and an MI6 officer, tasked with arranging a meeting around a female ISIS informant. The informant came forward after she was forced to marry a “prominent terrorist commander,” and she offered to provide U.K. forces with intel on the militant’s location, in exchange for safe passage, Daily Star reports.

After meeting with the informer, the team made their way through an “urban area” to a predetermined rendezvous point, the Daily Star reports, but as they were pulling out, they came under attack by Islamic State militants.

The team dismounted their vehicles and returned fire with small arms; the female sergeant took up a position as a rearguard to cover the vehicles, armed with a Heckler and Koch MP5K — a submachine gun geared more toward delivering a high volume of “fuck you and die” in close quarters than precision marksmanship.

“Every time a terrorist appeared she dropped them,” one source told the Daily Star, adding that she kept her teammates apprised of what was happening in the rear with a “running commentary” — which, if I had to guess, probably sounded like this: “I’m up, he sees me — ratatatatatat! — okay, all good, he’s down.”

“She took down at least three terrorists who were very close to over-running her position,” the source continued. “She reacted in the way the special forces are trained to do when they are involved in close quarter battle. She had her colleagues’ backs throughout the firefight and no doubt saved lives.”

The elite SRR was established in 2005 and is the only special forces unit in Great Britain that recruits both male and female personnel from all branches of the military, according to the Telegraph. Tasked with covert surveillance operations, its members and their identities are a closely guarded secret, the Telegraph notes.

Though the unnamed sergeant’s actions have earned her significant praise (and a lot of media attention), she’s not the only woman in Britain’s ranks to go toe-to-toe with Islamic State fighters in recent years. Last January, two female British soldiers — both in their twenties, fluent in Arabic and serving in the SRR — shot their way out of an ambush in Iraq alongside British SAS soldiers, the Daily Star reports.

As for the MP5-rocking sergeant? After the team broke the ambush and made their way back to base, “her colleagues were giving her high fives and calling her Britain’s first GI Jane” — though unlike Demi Moore’s character in the 1997 action flick, she’s real.

Being a professional, she chose to downplay the event, with one source telling the Star that “she made the point women are more than capable of serving on the frontline in special forces units and are just as good as men.”