As Russian aggression in recent years has prompted Sweden to ramp up military capacity, the country’s widely praised welfare system... 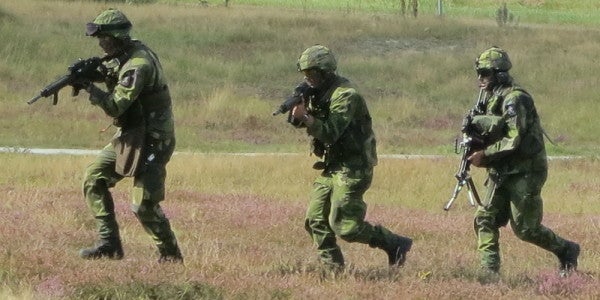 As Russian aggression in recent years has prompted Sweden to ramp up military capacity, the country’s widely praised welfare system has begun to pose a surprising problem in the recruitment of soldiers.

In 2010, the Swedish Armed Forces converted to a system of entirely voluntary participation, scrapping a 109-year old tradition of mandatory enlistment. But the experiment turned out to be a failure–six out of ten soldiers starting basic training dropped out before concluding their contract.

So the government this year reinstated mandatory service. The 4,000 men and women who start their training this summer will make up for some of the vacancies. But the issue of keeping soldiers on long-term contracts remains.

In a country where education and healthcare are free, young people are unlikely to choose a low-paid industry that leaves them without higher education after service. In 2018, the entry-level salary was bumped up from 18,000 to 19,000 kronor, or approximately $2,300 a month. The increase scratched soldier from the list of the country’s lowest paid professions, where it had been competing with berry picking and waiting tables.Yet it remains a far cry from reflecting government demand for recruits – and even less so – the inherent risks of the profession.

“We just can’t have the low salaries we have today,” said Lars Fresker, chairman of the Officers Association. “There’s a difference in countries where you can attract recruits by offering to pay for education. But Sweden has adopted parts of the U.S. system without realizing that the context is different here.”

Low wages are only part of the problem. In contrast to the high regard in which U.S. veterans stand, having served your country isn’t necessarily thought of as an accomplishment in Sweden. Often, it’s even a disadvantage.

“In the grand scheme of things, employers don’t consider having served as a merit,” said Anders Ramnerup, general secretary of the Swedish Veterans Association. “Most of them aren’t veterans themselves and it’s hard to formulate in a résumé how a machine gunner can be of use in a warehouse.”

As the country’s military capacity peaked during the Cold War, counting some 800,000 troops in the mid-60s, having served was pretty much a prerequisite for landing a job. Veterans became executives and managers who understood the value in having served. Today, with military personal in steep decline since the fall of the Soviet Union, only a small number of employers have any idea of the benefits of military experience. Especially soldiers returning from duty overseas may be in trouble as recruiters worry about high levels of PTSD.

“It’s in the [American] culture to be grateful towards those who served their country,” said Fresker. “The fact that returning troops get spontaneous applause in airports testifies to a completely different attitude.”

Daniel Höglund was part of the last batch of mandatory conscripts in 2009. He did two rotations in Afghanistan and Mali as a sniper and later dep. squad leader. Rather than the low pay, it was the lack of appreciation for soldiers that spurred him to quit his full-time contract in 2014.

“The sentiment I’ve encountered is that if you’ve served, there must be something wrong with you,” said Höglund. “Why didn’t you get a job like everyone else, is a pretty standard attitude when you’re looking for a job.”

Many of the benefits given to U.S. soldiers and veterans are already accessible to all Swedes. To meet policy goals, the government needs to create additional incentives for young people to join the military. Tax cuts, higher wages and the possibility of studying during service are all essentials to attract and maintain recruits. Without it, the Armed Forces will be stuck with a landslide of dropouts that drain the military budget.

Carl-Johan Karlsson was a Ranger in the Swedish Army. He holds a bachelor's degree in international politics from the American University of Paris and a master's degree in journalism from Columbia University. He now is a freelance writer in New York.