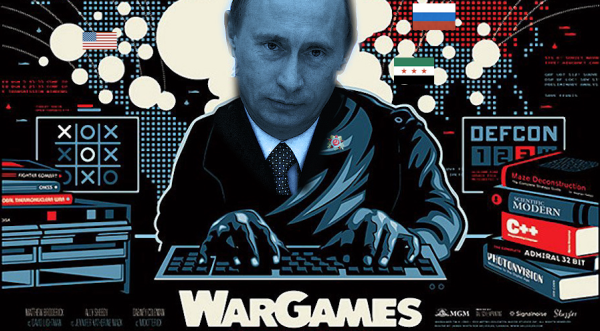 Lets game it out, just for fun. Russia invades with thousands of tanks, aircraft, and infantry. Europe, beholden to years of low defense budgets, folds. Shortly afterwards, Russia’s economy collapses due to the massive cost of mobilizing it’s military and occupying now refugee-filled, and probably insurgency filled European states. China won’t help anyone because all of this could leave them as the sole superpower. The United States, rising to meet its NATO obligations, possibly retaliates with limited nuclear strikes; Russia does the same. Maybe things escalate from there, although it’s hard to conceive as to why; but even if it doesn’t, the death toll from both war and starvation would become mind-numbingly high — and, to any sane strategic thinker, an impossible price to pay in the interest of a territorial accession.

This is just one worst-case scenario, and it’s worth ruling out ahead of the upcoming Vostok 2018 military exercises which, with more than 300,000 Russian troops, 1,000 aircraft, 900 tanks, and a 25-vessel naval armada tooling around in the Mediterranean, mark the largest wargames the country has seen since the height of the Cold War. To understand why, we need to flash back to 1981.

General Buck Turgidson doesn't want anyone to see the Big Board

The last time the Russia Ministry of Defense rattled its saber this hard was during the Zapad 1981 military exercises that students of geopolitics remember as a “What If?” scenario for Soviet aggression. Those exercises featured over 100,000 troops, strategic surface-to surface-missile launches, amphibious assault exercises, and one insanely massive tank formation — all made for one kick-ass music video of Soviet might.

At the time, the United States saw the Zapad ‘81 exercises this as a possible mobilization for an invasion of western Europe. Let’s remember that in 1981, the Soviet Union had just invaded Afghanistan, President Ronald Reagan had just assumed office, and Soviet panic Red Dawn was in pre-production. Zapad ‘81 was also “the first large-scale training exercise limited to conventional conflict, without simulated escalation to the nuclear level,” according to a RAND Corporation analysis, exercises that set the precedent of the idea of an invasion of Europe that doesn’t result in thermonuclear war.

In the and, all of those fears of a red tide wiping away democracy in western Europe in a deluge of Soviet warfighters were misguided; on the inside, the Soviet state and its strategic machinations were deteriorating rapidly. With shortages, bread lines, poor quality of life, and the family fun of living in a police state, the liberalization instituted by Gorbachev in the mid-80s would allow for the Soviet satellite states to separate from the lame duck mothership and result in the end of what was effectively a Russian empire.

The current exercise, Vostok ‘18 (East in Russian) is a similar breed of Russian bravado. Russia hosts exercises regularly like most modern militaries, and the sole reason this one is different in its scope and cost. The Russian economy is in the proverbial shitter: Although it isn’t as bad as the Yeltsin years, the standard of living among rank-and-file Russians has fallen 20% since 2014 according to a report from France24. The 2014 annexation of the Crimea wiped out any goodwill the Russian Federation had built up with the liberal world order. Sanctions on Russian companies have limited investment in Russia’s non-petro sector limiting the ability of the country to escape their energy resource dependency.

As a result of its economic dumpster fire, the Russian defense budget has contracted by 17% since last year, a notable drop for a country involved in numerousoverseasadventures since 2008, and who is about to put on one of the largest military exercises in history. Russia can’t afford its next-gen tank, and the Su-57 may not be produced in numbers that would be considered noteworthy. So why, then, would Russia spend a massive chunk of change on an exercise?

In part, the Vostok 2018 military exercises are a part of a broader information campaign to increase the worldview of Russia as a dominant military power. Besides the general foreign propaganda victory, it also galvanizes the patriotic Russian base that yearns for the Soviet days, at a time when economic discontent has resulted in street protest against the authoritarian figures in power. In essence, after the election meddling abroad, Russia is now seen as the 4chan of countries; skilled at the dark keyboard arts, and ready to troll unsuspecting democracies simply for the lulz.

Russia isn’t the only totalitarian regime eking out a PR coup from the exercises: A Chinese contingent from the People's Liberation Army consisting of 3,200 troops and 900 vehicles plans on participating in the weaponized shindig to the north. Ever since the Sino-Soviet split, relations between Russia and China have teetered between mistrust and outright violence. But as China rises, Russia sees a market for its natural gas resources, an ally against the liberal world order, and once again, a country to sell its weapons to. In the last three years alone, military cooperation between China and Russia has overcome Russian fears of that China simply will steal state secrets, with a $2.5 billion dollar deal for frontline Su-35S Flanker-E fighter jets that delivered fighters that until recently had remained off the table, for fears that China would reverse engineer their thrust vectoring engines.

But as the machinations of future Russian-Chinese cooperation begin to build and conspire, more immediate concerns are on the forefront of Russia’s strategic agenda.

If increasing Chinese cooperation is a long-term goal, the short-term gains of the giant exercise are a bit more imminent: added posturing during a period of tension over war-torn Syria.

In recent weeks, the regime of Bashar Al-Assad has reportedly prepared for an invasion of the rebel stronghold of Idlib, one of the last major holdouts against the Syrian Arab Army. In the process, Russia has moved numerous naval assets into the Mediterranean in anticipation of a U.S. response to a chemical attack on the rebels. The Russian Foreign Ministry even warned of a ‘false flag’ operation by the United States and the Syrian Rebels to stage a chemical warfare attack, a warning that effectively provides an information fog of war for if Assad uses chemical weapons to terrorize the rebels in Idlib.

A Syrian Democratic Forces soldier speaks with a mother and her child at a village near Dashisha, Syria, July 19, 2018. Syrian Demoby

Along with keeping a friend with a sweet port afloat in the Middle East, Russia has also gained first-hand insights on expeditionary warfare, U.S. tactics against their assets, and tested their newest weapons in real-world environments. Russian President Vladimir Putin noted quite candidly that “the use of our armed forces in combat conditions is a unique experience and a unique tool to improve our armed forces” — and with high-priced items like the Su-57 5th gen fighter taking to the skies over Syria, he likely means it.

This doesn’t necessarily bode well. Even though U.S. retaliatory strikes against Syria have gone off without a hitch, this does not preclude the possibility of an errant strike by the U.S. or attempts by Russia to interfere with the strike package itself, either kinetically or through the electromagnetic spectrum. Although jamming is considered a hostile act against U.S. forces, the complexities in Syria leave much room for debate on how the U.S. military would respond to a Russian jamming campaign. And having 300,000 troops mobilized, even if they are east of the Urals, signals to the United States that there could be a cost to use of force in Syria beyond the Mediterranean.

'Ukraine is game to you?'

Speaking of weapons: One final ancillary benefit to a massive movement of men and material is that it hides illicit arms transfers. In recent days, photos and videos of antiquated T-62M Main Battle Tanks being loaded onto rail cars have popped up on social media. The trains are alleged to be headed towards the Ukraine separatists regions, where pro-Russian rebels are still fighting daily with the Ukrainian military. The increase in transfers of old Russian weapons is much more deniable if thousands of armored vehicles are on the move within Russia proper.

Just to remind you. 9 days ago at least two depots in Eastern Military District took T-62 MBTs from storage and loaded them onto trains. https://t.co/K33ytfKGor

The benefits of Vostok ‘18 isn’t just military preparation and training, it is a series of more intangible goals that further Putin’s overall great-power strategy against the United States and her allies. When it comes to this 300,000 strong exercise, it's not about money — it's about sending a message.