This Army Tanker Found A New Mission at PayPal. Here’s How You Can Too

Editor's note: This story highlights a veteran at PayPal. Committed to filling its ranks with talented members of the military community,... 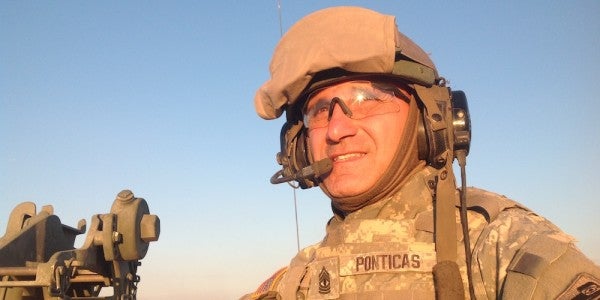 Editor's note: This story highlights a veteran at PayPal. Committed to filling its ranks with talented members of the military community, PayPal is a Hirepurpose client. Learn more here.

PayPal is a cutting edge financial company that's becoming a hub for veterans with technology skills. PayPal employs a lot of veterans and has a SERVE affinity group, which is the company’s veterans and allies network aimed at supporting employees who have served in the military. PayPal currently has 130 veterans as part of SERVE and wants to continue hiring many more like Army National Guardsman Louis Ponticas, a tanker who leveraged his engineering and operations background to get hired. Companies like PayPal are placing high priority on recruitment and retention programs that attract the veteran demographic to their workforce. 1st Sgt. Ponticas is among those who found a way to translate military experience combined with formal education to gain a career with the California-based employer.

Ponticas, Senior Director of Product OE, connected with PayPal in 2010 while still in Iraq, during his third overseas deployment. He was looking for an opportunity to get back into an operating role and found a familiar culture at the financial services company.

“When I was thinking about where to go, I was trying to find a job where I could find the things that I enjoyed about serving in the military, and I thought PayPal matched those pretty well. PayPal’s core values of collaboration, inclusion, wellness, and innovation are organic to military service. And I found even though it might defy the stereotype, the military’s a place where you have to be innovative. You’re always working with short resources and new situations,” he said.

Ponticas, who has served for 23 years, also found a sense of mission comparable to experiences with his military unit.

“One of the things I would struggle with in my corporate career is, where can I get a job where I find a sense of purpose the way I do when I have a uniform on. I thought PayPal’s brand – particularly our mission and the way its evolved now – is inspiring. It’s a place that makes you proud to work because we’re trying to democratize money, trying to help the little guy, whether he’s the small merchant or a consumer that’s maybe not as well served by banks … we can do something better for them,” he told Hirepurpose.

The senior NCO adds that he found surprising points of intersection between his MOS and civilian job.

“Tanks are an amazing combination of low- and hi-tech. On the one hand, you’re working on steel and tracks, so you know you need muscle, sweat, and tools like wrenches, sledgehammers, and grease guns. On the other hand, we have a turret full of digital technology to help us navigate, communicate, maintain awareness of the battlefield, target the enemy, and send rounds down-range,” he explained. “And off the tank, we can barely function without a wireless connection as so much of our administrative and training work has become digitized.”

Ponticas even sees parallel between technology development models and the military. “In Agile development, we work in small scrum teams, bringing a minimum viable product (MVP) to market and then improving it through multiple iterations,” he described. “Tank crews are like scrum teams as when a tank platoon reaches its objective, it may well set up its own version of an MVP called ‘a hasty defense’ to gain an initial secure defensive position. Like a scrum team, a tank crew will iterate, improving its position as time and circumstances allow.”

Ponticas says veterans are trained in the attributes that PayPal looks for in an employee, such as leadership, discipline, focus, and the ability to adapt.

“In a general sense, there are qualities that the military is going to bring independent of the MOS,” he said. “They (veterans) can bring the skills and the sort of values, behaviors that are applicable to the work we do at PayPal … very team-oriented, heavy focus on team development.”

In addition to operations and project management, PayPal employs across several other areas that overlap with military specialties, Ponticas says. Enterprise risk management, cybersecurity, and even military intelligence.

“I see fits, and we’ve made fits in other areas. For example, we have a former Marine Corps network communications officer working in Availability, Performance & Security, a former Navy program management officer is working in Enterprise Risk Management. And a former Army operations officer recently joined our Business Operations team.”

Roughly four years ago, the company established a military veterans network, driven by a former Marine officer who wanted to see PayPal veterans connect with each other as well as help bring more veterans into the tech industry. That network was reborn in 2016 as SERVE, one of several PayPal Diversity & Inclusion groups.

Ponticas is the president of SERVE, one of several PayPal Diversity & Inclusion groups.Courtesy

Ponticas was part of the original group and now serves as president of SERVE, which focuses on recruiting veterans into PayPal and tech, providing career development, and supporting local communities.

One such piece of advice he recommends to current transitioning service members preparing their own job search is, “look for the roles that energize them and best line up with their strengths.”