From infantry to banking: How 2 veterans found opportunities for growth at Fifth Third Bank 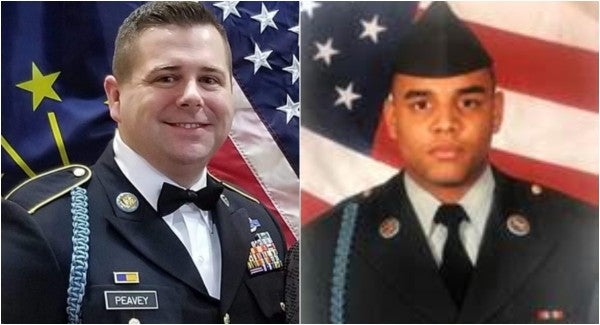 Editor's Note: The following story highlights a veteran atFifth Third Bank. Committed to including talented members of the military community in its workplace, Fifth Third Bank is a client of Hirepurpose, a Task & Purpose sister company. Learn more here.

Army veterans Steven Escobar and Jerry Peavey never imagined their years as infantrymen would lead to work in the banking industry. After serving their country, both wanted to take their civilian lives in a new direction. Upon landing at Fifth Third Bank, Escobar and Peavey found professional opportunities that have culminated in successful careers.

Escobar joined the Army National Guard right out of high school. He was looking for a way to pay for college and needed structure in his life; he found both in his six years in the Army. Peavey comes from a long line of military service; after the terrorist attacks of 9/11, he knew he too needed to serve. He joined the Army National Guard in 2003 and is still actively serving today.

Escobar and Peavey knew their infantry experience was incredibly valuable to the military, but neither was sure how it would translate into the civilian world. “Initially, I did not even put my military years on my resume,” Escobar said. “I didn't think employers would know what it meant.” After updating his resume, he received a lot more attention. “Companies appreciated my service, because they knew it meant that I had strong leadership skills and that I could make sound judgments,” he explained.

Peavey struggled with translating military jargon into civilian-friendly terms on his resume. “I was the leader of 35 soldiers and taught the Army's adult learning model for years,” he said. “I didn't know how to show that on my resume.” With his wife's help, he found that by focusing on the management and administration side of his Army experience, he could bridge the two worlds more easily.

Fifth Third Bank, headquartered in Cincinnati, operates banks in several states. The company has a reputation for its customer service and community relations. Neither Escobar or Peavey planned to go into banking; neither had financial experience or training. Yet both found that a career with Fifth Third Bank offered opportunities for upward mobility. “You may have to start at the bottom, like a private,” said Peavey, “but with hard work and dedication, you can move up through the ranks just like in the military.”

Escobar began in a banking call center at a friend's suggestion. He spent the next several years gaining experience to attain his dream position in business development. “I had a sales background, but needed to get the financial and analytical side down in order to move forward,” Escobar said. Every step of the way, he was focused on bettering himself to move up through the industry. Escobar started at Fifth Third Bank in October 2017 and has not looked back since. “I wanted to work with high-value clients,” he said, “and as a middle market relationship manager, I'm doing just that.”

Peavey was not sold on banking immediately. He wanted a professional career but was unsure of which path he should take. “I thought banking did not fit in with my 'tough guy' persona,” he said. “I didn't think a military guy could sit behind a desk all day.” It took some convincing by his wife to help him see how banking could be a good move. After beginning as a personal banker with Fifth Third Bank, Peavey quickly realized that he was in the right place. He loved that he could create positive change in the lives of his clients every day. “It's about so much more than money,” he said. “It is about the personal connection.”

The principles at Fifth Third Bank instantly resonated with Escobar and Peavey. “The culture at Fifth Third is very similar to the military,” Peavey explained. “We work as a team to serve our customers, no matter what.” Sometimes that means sharing in failures as a team as well as successes. “The atmosphere is so supportive that employees feel comfortable doing their jobs,” he added.

After working in other banks, Escobar appreciated how Fifth Third allowed employees to perform. “Fifth Third Bank trusts their employees,” he said. “They let us be subjective in how we do our jobs, as long as we put the customers first.” Having that high level of autonomy and responsibility was reminiscent of the military. “The job specifics have changed, but the skill set that I depend on today came from my years in the Army,” Escobar said. “Fifth Third Bank recognizes that and allows me to use my specific skills to better serve our customers.”

Fifth Third Bank values its veteran employees, and Escobar and Peavey have benefitted greatly from various veteran-focused initiatives offered by the bank. As an active member of the Army National Guard, Peavey's service frequently takes him away from home. “Fifth Third Bank has been fantastic in allowing me to meet my military commitments,” he said. “The bank is very supportive of service, and they understand the laws that are in place to protect veterans.” While Peavey juggles both jobs, he has always received backing and encouragement from his coworkers and supervisors. Working in such a supportive environment has allowed him to continue serving his country without the worries that often come with it.

In 2018, Fifth Third Bank updated its policy on pay for veterans serving on reserve duty for four weeks or longer. Those employees, like Peavey, now receive 100 percent of their regular bank pay for up to four weeks while they are on duty; after that time, they receive differentiated pay. This change is a huge benefit for veteran employees. “The time lapse between completing military duty and getting paid can be very stressful,” Peavey said. “The bank is taking that financial pressure off by filling the gap for employees serving on military duty.”

Peavey and Escobar place great value in Fifth Third Bank as a veteran employer. “There are endless opportunities within the bank,” Escobar said. Like the many MOSs in the Army, the bank offers a variety of career opportunities based on experience and interest. “The bank is looking at work ethic, leadership skills, and responsibility more than any specific job skills,” Escobar said. “They know they can teach the job specifics, but the underlying values are what really matter.”

Today, Escobar and Peavey enjoy fulfilling careers with Fifth Third Bank. With the support of a veteran-friendly company and an abundance of opportunities, two Army vets have found rewarding professions that will take them into the future.