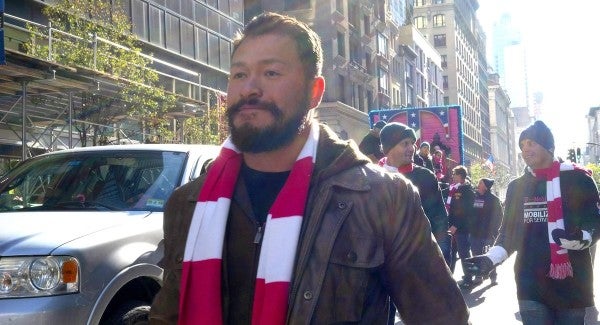 Editor's Note: The following story highlights a veteran at T-Mobile committed to including talented members of the military community in its workplace. T-Mobile is a client of Hirepurpose, a Task & Purpose sister company

“I want to be a point of contact for any veteran who wants to come to work for T-Mobile,” says Otto Chan-Arias. The former airman's open-door policy to military personnel supports that of the company, which is dedicated to hiring 10,000 more veterans and military spouses by 2023. Born in Costa Rica and raised in Washington state, Otto eventually found his way from the Air Force to working as a Senior Unix Systems and Design Engineer at T-Mobile.

Here he takes us from his experiences on the battlefield to resetting his civilian career with the help of company benefits – and how he plans to pay it forward to help others making similar job and life transitions post-service.

What led you to the Air Force initially?

I just always wanted to serve something larger than myself. I wanted to be like my Dad, who served in the Army. He wanted me to join the Air Force, because he liked its reputation within the military branches. So in 2007, at age 19, I did. It was one of the best decisions I ever made.

My training was full of childhood dreams come true. In jump school, I got to freefall parachute from airplanes. Air assault school included repelling from helicopters. Sniper training, close-quarter combat training and so much else showed me the full capability of our military. I also got to travel to various countries, including humanitarian missions to help those in need during natural disasters, and see and interact with so many different cultures around the world, which was awesome. Ultimately, while serving in Afghanistan as a close precision engagement team leader, my unit got hit by an IED (improvised explosive device) where I suffered a TBI (traumatic brain injury). I received an honorable discharge, and was awarded a Purple Heart for wounds received in action.

How was your transition back to civilian life?

The Air Force played a huge part. They put me through TAPS (Tragedy Assistance Program for Survivors) to clear my mind of traumatic things so I could start anew. They helped me cope with my PTSD. I also started playing video games as a release, which got me to thinking more about technology. As fate would have it, when I first decided to pursue a civilian career in executive protection, I wound up being contracted out to a high-profile technology executive. I was around tech, thinking about tech – but he made me really want to be a part of it.

And that's what brought you to T-Mobile?

Yeah. A friend of mine at T-Mobile who's a security analyst encouraged me to apply for a technology internship. At 28, it would be a total career reset. After three months, I went full-time as an associate engineer. It's only been three years and now I am a System Administrator. I oversee customer-facing applications – like making sure you actually get your $4 movie tickets on the T-Mobile Tuesdays app! My growth has never stopped at this company, and I don't see that changing. My goal is to be a Senior Director. If I have it my way, I'd never want to leave T-Mobile.

Any words of advice for transitioning veterans?

Don't get tunnel vision. Keep an open mind. Adapt to change. I went from a combat-oriented position to working with systems engineering. I want to tell these veterans that many of the skills that you've learned in the military translate to civilian life. Maybe you don't think you have project management experience because you were combat-oriented. But you were project managing. You oversaw a high-level project and you ran with it. That can transition into a project management position in a corporate environment. T-Mobile's Veterans & Allies Network(VAN) offers great career support to employees, they can help translate your military experience on your resume. It's a great support system.

Are there other benefits veterans can tap into?

T-Mobile offers so many benefits and tools. There's the tuition reimbursement program. Once your GI Bill's done, you can use that to get your continued education for free. My plan is to get a business IT management master's degree. The T-Mobile ONE for Military Plan. It's great. It's the biggest military discount in wireless and you get unlimited data, so you can keep in communication with your spouse and family.