Meet Your Brand New Secretary Of The Army

After months of delays, the Trump administration finally has a new Secretary of the Army. Dr. Mark T. Esper, an... 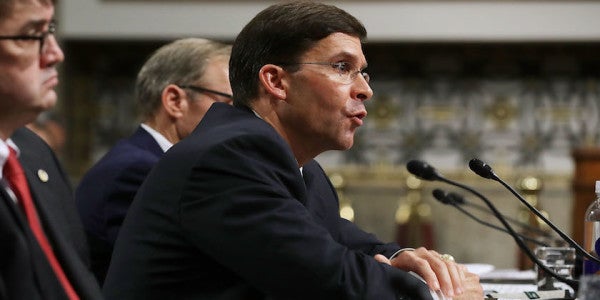 After months of delays, the Trump administration finally has a new Secretary of the Army. Dr. Mark T. Esper, an Army veteran and chief lobbyist for defense contractor Raytheon since 2010, was confirmed by a 89-6 vote in the Senate on Nov. 15, becoming the 23rd person to hold the office since its creation in 1947. As Army secretary, the perennial Washington defense insider will now oversee everything from manpower and personnel to weapons systems and equipment acquisition for a fighting force on the brink of its biggest shakeup since the Vietnam War.

Esper is President Donald Trump’s third crack at filling the Army’s top post. Billionaire Wall Street moneyman and Florida Panthers owner Vincent Viola withdrew his name from consideration for job in February “after concluding it would be too difficult to untangle himself from his business ties,” the New York Times reported at the time, citing potential personal gains from government contracts for his majority stake in Miami-based airline Eastern Airlines. In May, Tennessee Republican State Sen. Mark Green bowed out of his nomination after his past controversial comments about Muslims and LGBTQ Americans emerged.

So who is Mark Esper, America’s new Army secretary? Here’s what you need to know.

The new army secretary is a Screaming Eagle

After graduating from the U.S. Military Academy in 1986 and serving as a rifle platoon leader, Mark Thomas Esper was deployed with the 101st Airborne Division to Saudi Arabia and Iraq during the 1991 Gulf War. According to the Pittsburgh Tribune-Review, Esper’s battalion was a crucial part of the legendary “left hook” that saw the massive buildup and rapid deployment of some 350,000 troops, including 82nd and 101st Airborne Divisions and the 1st Marine Expeditionary Force, to expel the Iraqi military from Kuwait in the early months of 1991.

For his actions during the Gulf War, Esper was awarded a Bronze Star and the Combat Infantryman Badge. He later led an Airborne rifle company in Europe to close out his decade on active duty, rising tot he rank of lieutenant colonel. After transitioning to the National Guard and Army Reserve in 1994, he served as an Army Fellow at the Pentagon while working on his MPA at Harvard’s John F. Kennedy School of Government.

After leaving Harvard, Esper did the whole smart-guy thing and picked up a PhD in Political Science from George Washington University. According to AllGov, his 2008 dissertation was apparently titled The role of Congress in the development of the United States’ strategic nuclear forces, 1947-1968 — which, well, seems timely!

Modernization Priorities for the U.S. Army by Jared Keller on Scribd

During his confirmation hearing before SASC on Nov. 2, Esper echoed the focus on readiness that Army Chief of Staff Gen. Mark A. Milley emphasized in October as part of the branch’s long-term modernization roadmap.

“My first priority will be… ensuring the total Army is prepared to fight across the full spectrum of conflict,” Esper said. “With the Army engaged in over 140 countries around the world, to include combat operations in Afghanistan and Iraq, training rotations to Europe to deter Russia, and forward deployed units in the Pacific defending against a bellicose North Korea, readiness must be our top priority.”

Related: The Army’s New Modernization Program Could Be The Branch’s Biggest Shakeup Since The Vietnam War »

That readiness, Esper said, starts with training the best possible crop of soldiers — which suggests that the current controversy over Army waivers for recruits with a history of mental health issues or self-mutilation could be among the first political issues he’ll have to tackle.

Readiness starts with “recruiting and retaining the best our nation has to offer, ensuring these young men and women are well-trained and well-led, and equipping them with the best weapons and technology available,” Esper told lawmakers. “Every unit must be prepared to deploy and accomplish its mission. These are the fundamental Title 10 duties of the Secretary of the Army, and, if confirmed, I intend to do them well.”

The Pentagon and defense industry have enjoyed a cozy “revolving door” relationship since the beginning of time, and Esper’s post-service career is no exception. After several military-focused legislative positions in Congress (including legislative director and senior policy advisor for then-Republican senator Chuck Hagel of Nebraska, who would later become secretary of defense) and as a deputy assistant secretary of defense for negotiations policy at the DoD, Esper left government service in 2006 to jam out with the Aerospace Industries Association. In 2007, he joined the U.S.-China Economic and Security Review Commission for a year before taking a job with the U.S. Chamber of Commerce in 2008.

Esper’s tenure as Raytheon’s chief lobbyist began in 2010, and his time at one of the government’s largest defense contractors seemed sure to complicate his nomination: In July, shortly before the White House named Esper as its nominee for Army secretary, Senate Armed Services Committee chairman Sen. John McCain, Republican of Arizona, expressed consternation with the Trump administration’s penchant for nominating executives from the country’s largest defense firms.

There could be conflicts of interest

McCain’s anxieties over the military-industrial revolving door aren’t unwarranted. While the Trump administration has the most generals in executive branch leadership positions since World War II, more than half of the White House’s federal nominees have close financial ties to the industries they are being appointed to oversee, setting up a tangle of conflicts-of-interest that could mire the Army in unnecessary political distractions.

Esper, with his ties to Raytheon, isn’t excluded from that scrutiny. According to the financial disclosure forms filed with the Office of Government Ethics (OGE), Esper’s annual salary and bonuses at Raytheon totaled $1.52 million, while his stock options and other forms of deferred financial compensation from the company could range anywhere from $1.5 million to a whopping $6 million. And although Esper pledged to recuse himself from all Raytheon-related matters for two years during his service as Army secretary, The Hill notes those juicy morsels of deferred compensation are set to pay out after five years away from the company — a potential layaway incentive for Esper to favor Raytheon-related contacts while holding public office.

Don’t expect a bombastic DoD official who may rival the commander-in-chief for media attention. As Breaking Defense’s Sydney Freeberg astutely observed following Esper’s nomination in July, the new Army secretary will likely serve as a foil for the stronger personalities in the Pentagon, filling the role of a “soft-spoken civilian wingman to the wisecracking Chief of Staff, Gen. Mark Milley.”

Esper’s low-key style “is also in keeping with what one well-placed source tells us is Defense Secretary [James] Mattis’ preference for civilians without their own constituencies and policy goals,” wrote Freeberg. “Mattis wants to run his department and run it his way — which President Trump, so far, appears to be willing to let him do.”