In a crowded field of service secretary nominees that includes billionaires, decorated war veterans, and state senators, she’s the only... 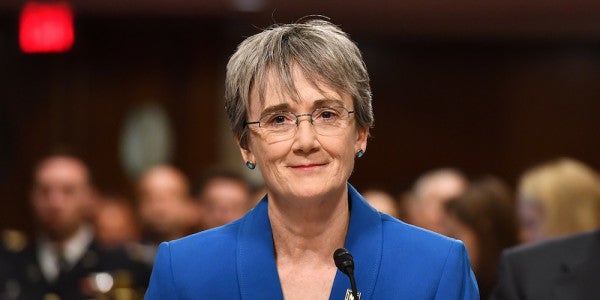 In a crowded field of service secretary nominees that includes billionaires, decorated war veterans, and state senators, she’s the only one who has made it through the Senate confirmation process. So what sets Heather Wilson, the newly confirmed Secretary of the Air Force, apart from the pack?

A former congresswoman, Wilson enjoyed overwhelming bipartisan support in an administration where President Donald Trump has faced historic difficulties assembling a cabinet that can pass Senate approval. She was confirmed by the Senate 76-22, a wide margin that included many Democratic votes.

Wilson hasa great pedigree for the job. She earned masters and doctoral degrees as Rhodes Scholar. She served in the National Security Council in George H.W. Bush’s administration during the fall of the Berlin Wall. She then spent a decade representing New Mexico’s 1st congressional district from 1999 to 2009. On the Hill, she was on the House Energy and Commerce Committee and chaired the Subcommittee on Technical and Tactical Intelligence. She was successful in in the private sector, working with companies in the defense, industrial, and scientific industries. And in the months immediately prior to her appointment to this role, she was president of The South Dakota School of Mines and Technology.

But in order to really understand Wilson’s strengths, it’s important to view them in the context of what held back other nominees to lead the military’s service branches.

The first nominee to withdraw his name from consideration was Trump’s first pick for Army Secretary,Vincent Viola,billionaire Wall Street trader and owner of the National Hockey League team the Florida Panthers. Viola went to West Point in 1977 and rose to the rank of major in the Army Reserves. Viola was very involved in the Army (he funded West Point’s counterterrorism center) and had reportedly called the job of Army Secretary a “dream job.” But Viola quickly learned that the Pentagon has strict ethics rules. Ultimately unable to disentangle his financial holdings to prevent conflicts of interests, Viola dropped out about a week after the inauguration.

Shortly thereafter, Trump’s pick for Secretary of the Navy, Philip Bilden, withdrew his name amid similar concerns. A former Army intelligence officer, Bilden had built a strong career in the private sector, working in private equity with emerging markets. But in the end, Bilden felt he“ not be able to satisfy the Office of Government Ethics requirements without undue disruption and materially adverse divestment of my family's private financial interests,” he said in in a statement to CNN,

Both Viola and Bilden’s failures highlight one key reason for Wilson’s success: She had no entangling financial holdings and was able to effectively navigate the Pentagon’s ethics rules, divesting her stocks in U.S. defense contractors like Intel, IBM, Honeywell, and Raytheon. And while Wilson faced criticism from prominent Democrats like Rhode Island’s Jack Reed, the ranking member of the Senate Armed Services Committee, over $20,000 per month in income from consulting work she did with a lab company in New Mexico, for which she reportedly failed to provide documentation, she still handled her financial conflicts better than other nominees.

That brings us to Mark Green, Trump’s second nominee to be Secretary of the Army, who withdrew his name from consideration last week amid controversy over past comments on the LGBT community, evolution, and Islam. Green, a state senator from Tennessee, served as a flight surgeon in U.S. Army special operations and interviewed former Iraqi dictator Saddam Hussein following his capture in late 2003.

In Green, it seemed Trump had picked a combat decorated doctor and another West Point alumnus, and he certainly seemed great for the role on paper. But his approach to social issues proved politically toxic. Greenonce called evolution “a bad argument.” During a Tea Party meeting in 2016, Green stated that “when you start teaching the pillars of Islam and you start teaching how to pray as a Muslim, that is over the top and we will not tolerate that in this state.” And as recently as September 2016,Green said, “if you poll the psychiatrists, they're going to tell you that transgender is a disease.”

Green dropped out after it was clear his confirmation would embarrass the administration and likely ultimately fail.

Unlike Viola and Bilden, Green’s failure was a display of his ego and the Trump administration’s sloppy vetting. But all three of those picks resemble Trump’s style, and all three failed.

Back in March, I wrote a piece on this site on Defense Secretary James Mattis’ influence over the national security team and talked then about picks in the Trump mold. “There’s a style to Trump’s picks. They often look a bit like him,” I wrote at the time. “Trump likes two kinds of people — businessmen or brash outsiders.”

All three nominees for service secretary who have thus far come up short have fit one of those two categories, Viola and Bilden the wealthy businessmen and Green the brash outsider.

But then there’s Wilson. More than 100 days into the administration, she’s the only service secretary. The departments of theArmy andNavy are both currently headed by deputies serving as acting secretaries.

Wilson was a thoroughly qualified, if imperfect nominee for the role; Reed’s opposition to her illustrates that. A former Army Ranger and paratrooper, he’s a fairly moderate straight shooter with a long record of approaching national security issues with a nonpartisan lens.

Ultimately, Wilson’s academic pedigree, including being a Rhodes Scholar, helped qualify her as a technocrat for the role. Her business holdings likely conveyed an understanding of the contracts, and relationships with key defense contractors who work closely with the Air Force. Her experience in the National Security Council in the first Bush’s White House gave her direct experience crafting defense policy. Finally, her time on Capitol Hill gave her the political experience and relationships necessary to navigate her confirmation.

We’ll have to wait and see if the next Trump nominees for these critically important positions fit her mold and follow her example. In the interim, Pentagon leadership, and Trump’s ambitious plan to “rebuild” the military, will be in some degree of limbo.