The National Security Team Is Looking More And More Like Mattis

The most acrimonious moment so far in the short relationship between President Donald Trump and the legendary retired Marine general... 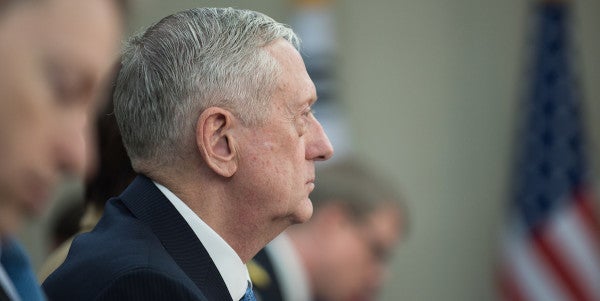 The most acrimonious moment so far in the short relationship between President Donald Trump and the legendary retired Marine general he selected to serve as secretary of Defense, Jim Mattis, came roughly two weeks before the inauguration. A story fromthe Washington Post detailed how Mattis was clashing with Trump’s inner circles over who would fill key Pentagon staff positions.

Josh Rogin’s report in the Post detailed how Mattis was clashing with retired Army Lt. Gen. Michael Flynn. Flynn had been Trump’s key national security advisor for the bulk of the campaign, a close confidant who was rumored to be a potential pick for vice president, and soon after the election, was tapped by the then-president-elect to be the national security advisor.

Central to the report were two details: First, that Mattis learned of Trump’s pick to serve as secretary of the Army, a billionaire Army veteran and hockey team owner, Vincent Viola, from news reports, rather than having been consulted.

“Mattis was furious. It made him suspicious of the transition team, and things devolved from there,” one source told the Post.

Second, officials loyal to Trump were preventing Mattis from selecting qualified candidates to key Pentagon posts if those officials spoke out against Trump during the campaign.

Now, just over a month into the Trump administration, the national security leadership looks quite different than we thought it would during the transition. More and more, it’s beginning to look a lot like Mattis.

Related: Is The Mattis-Trump Honeymoon Over? »

There’s a style to Trump’s picks. They often look a bit like him. They’re brash renegades, like Flynn, who was fired as director of the Defense Intelligence Agency by the Obama administration and had a tendency to tweet conspiracy theories. Or they have experience in business, like Trump, adept at attaining wealth, but have little experience in government. Viola fits this mold, so did Trump’s pick to run the Department of the Navy, Philip Bilden, a former Army intelligence officer who ran the Hong Kong branch of a prominent hedge fund, who has since dropped out.

Philip Bilden withdrew his nomination to be secretary of the Navy citing ethics rules.

Think about Trump’s insistence on calling Mattis “Mad Dog,” a nickname Mattis has said he doesn’t care for, andthose who served with him say doesn’t accurately capture his personality. Trump likes two kinds of people — businessmen or brash outsiders.

In contrast, the Mattis mold is somber, academic, realist. In terms of style, they reflect his more fitting nickname, the “Warrior Monk.” Look atthe pick for secretary of the Air Force, former New Mexico Republican congresswoman Heather Wilson. She’s a former Rhodes scholar who served in President George H.W. Bush’s National Security Council as director for European defense policy and arms control. She has Mattis written all over her.

In the less than six weeks since Trump’s inauguration, something interesting is happening with the picks in the Trump mold: They’re dropping like flies.

First, it was Viola, who, in early February,removed himself for consideration as Army secretary, citing Department of Defense ethics rules that made it difficult for him to disentangle himself from his finances.

Then,Flynn resigned in scandal after lying to senior Trump officials — including the vice president — about details of a call to Russia’s ambassador before the inauguration.

Then, earlier this week,Bilden dropped out as well, also unable to navigate the Pentagon’s ethics rules.

“One of the things that Donald Trump has done is to go for very successful people to be in these positions, and that means they’re usually wealthy, and that means they usually have very tangled finances,”said David Gergen, a senior political analyst for CNN who served in four different presidential administrations, during a television appearance when the news about Bilden broke.

“But I also think it underscores … something that hasn’t gotten much attention, and that is Sec. Mattis, who oversees the Navy secretary and the Army secretary, and is seen as one of the real heavyweights in the administration, is having serious conflicts, reportedly, with the White House over the appointments process in general,” Gergen added. “He sees national defense as a bipartisan issue, and therefore he’s willing to go for Democrats to fill some of those positions … the White House doesn’t want to go down that track, and right now, they’re at loggerheads.”

None of this is to say that Viola or Bilden were not qualified for their roles, nor is it to suggest that Mattis did not like them. Though it seems from the Washington Post report he was unhappy about not being consulted about Viola, Mattisreleased a statement expressing confidence in Wilson, Viola, and Bilden before the latter two dropped out. I’m merely speaking to the style of leaders who are filling these key national security roles. They’re falling in two distinct camps.

And so, less than six weeks into the administration, the national security team looks a world apart from how it appeared it would look when Rogin wrote his report in January. Mattis seems to have more power and influence over the national security structure than ever before, and he’s picking people who fit his “Warrior Monk” style. Brash personalities and people from the business world are dropping out, and leaders from the Mattis mold are advancing through the confirmation process — or in the case of McMaster, even replacing leaders from the Trump camp. The national security team is looking a lot more like Mattis, and he has all of the momentum.