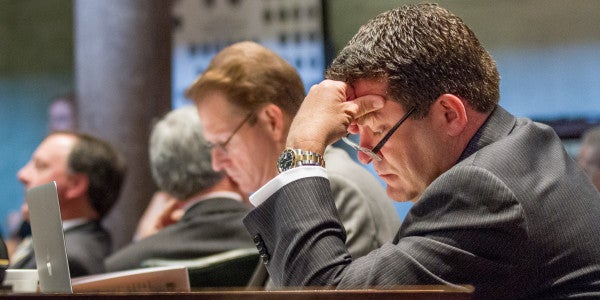 Tenessee Republican lawmaker and Iraq war veteran Mark E. Green withdrew his name from consideration to serve as President Donald Trump's Secretary of the Army on Friday, citing “false and misleading attacks against him” in a statement.

Green, a retired Army flight surgeon, has been embroiled in controversy for weeks over his past comments regarding LGBT Americans (namely that “transgender is a disease,” per CNN) and the theory of evolution (Green says he's a “creationist“) that inflamed Democratic lawmakers and liberal activists.

“Tragically, my life of public service and my Christian beliefs have been mischaracterized and attacked by a few on the other side of the aisle for political gain,” Green said in the statement. “While these false attacks have no bearing on the needs of the Army or my qualifications to serve, I believe it is critical to give the president the ability to move forward with his vision to restore our military to its rightful place in the world.”

Green had previously defended himself on Facebook on April 25, asserting that “certain people are cutting and splicing my words to paint me as a hater.”

“I believe that every American has a right to defend their country regardless of race, ethnicity, gender, sexual orientation, gender identity, and religion,” he wrote. “It's the radical left that won't allow the latter.”

Green is the second Army Secretary nominee to withdraw their name from consideration since Trump's victory in November. In December, Trump nominated billionaire hockey team owner Vincent Viola for the post, lauding Virtu Financial Inc. founder for his “outstanding work ethic, integrity, and strategic vision, with an exceptional ability to motivate others.”

Viola withdrew in February amid allegations of shady financial dealings and, among other things, punching out a concessions worker at a luxury racehorse auction in Saratoga Springs, New York.

It's unclear who the Trump administration will tap for their third crack at the post. Writing after Viola's nomination in December, Task & Purpose's Sarah Sicard surfaced a few possibilities:

Earlier, it was rumored that retired Army lieutenant colonel and former Congressman Allen West was in contention for the post. West, however, retired to avoid court martial for torturing an Iraqi policeman in Tikrit in 2003. In interrogating him, West fired a gun near the man’s head.

But Trump’s pick for Defense secretary, retired Marine Corps Gen. James Mattis has a bit of history with West, according to Roll Call. Mattis called West a “commander who has lost his moral balance or has watched too many Hollywood movies,” according to Thomas Ricks in his book “Fiasco.”