Under ordinary circumstances, an enemy’s basic intentions are clear: kill or be killed, whether on the front lines of battle... 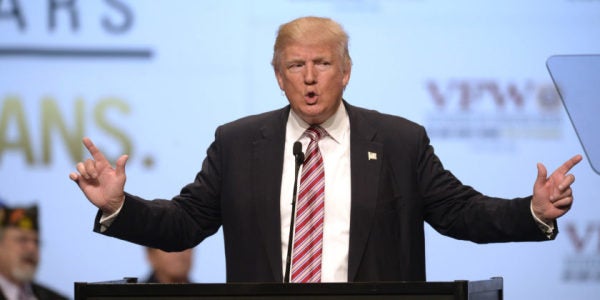 Under ordinary circumstances, an enemy’s basic intentions are clear: kill or be killed, whether on the front lines of battle or in the red waters of the free market. Far from easy to execute, but fairly easy to understand. But what's a strategist to do when his own forces become so wedded to mediocrity and self preservation that they become cultural norms? When accountability itself becomes the enemy to progress? Where any steps taken to bolster accountability are institutionally thwarted, with a little help from labor unions and pro-employee federal policies?

With these challenges in mind, the Department of Veterans Affairs’ problems don't start at the top with the secretary. Nor do the problems begin with the frontline clinical and administrative staff. They start with “the Middle” and propagate upward and downward along the lines of accountability that are to be shared at all levels. For that reason, the Middle is not just a problem, but will perhaps be the most serious problem that awaits the Trump administration’s pick for VA secretary.

The Middle, a reference to the mid-level management tiers of VA, best demonstrates what happens when authority and accountability diverge, thus fostering an environment ripe for plausible deniability when things go wrong. Most of the public and too many in our government don't understand how the VA healthcare structure is set up and how this structure has essentially abetted plausible deniability at certain levels. All 1,233 VA healthcare facilities, including 168 medical centers and 1,053 outpatient sites of care, according to VA,fall within the jurisdiction of a Veteran Integrated System Network, or VISN, of which there are 21. Those VISNs are managed by directors and other senior managers who control the funding and are supposed to oversee the performance for the VA facilities and providers under their respective auspices. This structure was intended to decentralize decision-making authority and integrate the facilities to develop an interdependent system of care.

Dear President-Elect Trump, The Military Community Wants You To Address These Issues »

Over-decentralization occurred over time though, spurring rapid growth in the total number VISN staff nationwide, which only called for 220 in 1995. In fiscal year 2011, the combined total number of VISN employees had climbed to 1,340, a 509% increase, while bedside clinician and nurse staffing in specialized VA services eventually plateaued then fell behind demand. The VA failed to adjust by not appealing for more resources from Congress that would have enabled the department to scale its critical healthcare operations to actual demand, particularly in specialized services such as spinal cord injury and disorder care and inpatient mental health. The results now speak for themselves.

Consequently, VA is left schlepping an overpaid, overstaffed, and underworked layer of middle-level management that has enjoyed relative anonymity whenever scandals hit the headlines. These offices’ limited capacity to provide close managerial oversight means that the VA medical centers in their networks are free to undertake activities, such as deviation from policies, without the approval or even knowledge in some cases of the VISN offices and Veterans Health Administration central office. To make matters worse, VHA central office suffers its own issues as a result of the yawning chasm lying between its policy and operation functions, an extension of the Middle in terms of diffused accountability.

So when the scandals at the Phoenix, Tomah, and other VA facilities had hit the news, it reportedly “surprised” VA senior leadership. The public channeled its outrage toward the facilities involved and the VA secretary, and rightfully so. We know the names of former Phoenix VA director Sharon Helman, who eventually pled guilty to unethical practices. We’re also well familiar with the illegal pharmaceutical practices of Dr. David Houlihan, Tomah VA’s so-called “Candy Man.” But the public and media don’t know the VISN directors or the lower-level VHA central office officials involved at the secondary and tertiary levels of responsibility, who collected paychecks, and probably bonuses, despite their highly publicized failures of leadership in those cases.

What VA needs is a leader who either comes from within its own ranks or at least has worked with VA long and close enough to know where the bones are buried. One who will have the insight and confidence to make badly needed, likely unpopular changes, starting with drastically downsizing the VISNs, consolidating policy and operation functions at VA central office, and converting as many administrative functions to clinical positions as possible in understaffed VA hospitals. More importantly, VA needs a leader who won't have to rely on the counsel of career bureaucrats who are content to simply wait out another wave of congressional scrutiny and public backlash; bureaucrats who are willing to suffer yet another new secretary’s short-term, superficial solutions to fixing VA until the next election.

Hopefully, that someone will understand that the problems VA suffers are not sitting out in the open, where it's been easy for the public, media, and politicians to whack it like a piñata with every new headline. The problems comfortably lie in the interstices of a huge bureaucracy, where moral hazard and complacency fester, hiding in blind spots and behind the good works of the thousands of federal employees who work hard and are fed up with those who hardly work.

Whether this leader exists remains to be seen.