In Massachusetts, a local police squad is gearing up for war — even though the only shots they’re likely to... 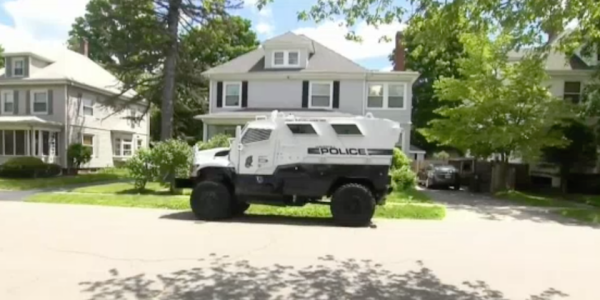 In Massachusetts, a local police squad is gearing up for war — even though the only shots they’re likely to encounter in their campaign against their fearsome suburban foe are of Jagermeister.

Twenty-year-old Ian Kessel is so dedicated to the party life that police have stationed a 19-ton, $658,000 MRAP vehicle outside his home on Lexington Avenue in Haverhill, Massachusetts, to deter the former local high school football player from throwing some of the most epic bacchanals this otherwise quiet New England enclave has ever seen.

“Ridiculous and unnecessary” is how the two women who opened the door of Kessel’s home when reporters tried to reach him for comment described the massive combat vehicle, which has been keeping the peace in Haverhill since last Friday after police received so many complaints about Kessel’s shenanigans that they decided to deploy a truck outfitted for the insurgent-infested streets of Baghdad.

But neighbors say the MRAP is a godsend. Kessel, who was arrested last year for armed robbery and appeared in his mugshot sporting what is known as a “landing strip” goatee, has apparently been partying so hard since he got out of the clink that he’s single handedly transformed Lexington Avenue into a Vegas-like cesspool of sin and debauchery.

“Over the past year it’s become nightly parties,” one neighbor said in an interview with NBC Boston. “It appears they sleep during the day, and there are multiple cars from out of state and in state come to the door at all hours of the night.”

Haverhill police acquired the surplus MRAP last year and have since used it as a so-called “nuisance abatement vehicle,” according to NBC Boston. Equipped with surveillance cameras and a formidable shell of one-inch thick steel plating designed to shield occupants from prying eyes and massive bombs, the MRAP is perfectly suited for the task of bringing an insatiable party animal like Kessel to heel.

“I’ve lived here for 15 years and it’s been going on all that time,” a Lexington Avenue resident told NBC Boston.

Yes, that’s right. It seems Kessel has been raising hell in Haverhill since he was only five. But his reign of terror is finally over, vowed Haverhill Police Detective Lt. Robert Pistone, and the good people of Lexington Avenue have the MRAP — called the “Armadillo” — to thank.

However, there may be another explanation for the calm that has beset Lexington Avenue since the MRAP arrived: Kessel wasn’t there. Turns out, he was in Florida, where he was arrested early Monday morning and charged with marijuana possession and resisting arrest, marking the second time he’s been arrested this year. In April, he was arrested for shoplifting in New Hampshire.

According to Haverhill newspaper The Eagle-Tribune, Kessel was last spotted by police in Haverhill on Friday, when the authorities rolled up to his house in the Armadillo. “Officers were going to talk to him about being a better neighbor,” Piston told the Tribune. What happened next was classic Kessel: He jumped over a fence and ran — all the way down to Florida, to party some more.