The Navy is known for its delightful uniform choices, from its iconic dress whites to the signature bucket hat. But... 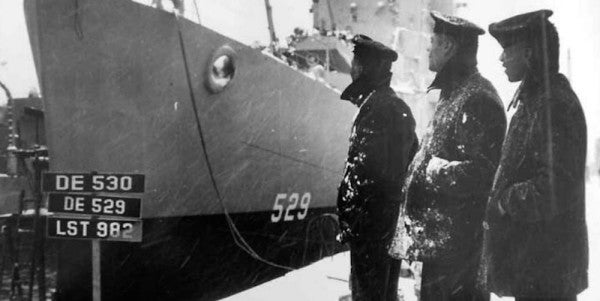 The Navy is known for its delightful uniform choices, from its iconic dress whites to the signature bucket hat. But no item is as recognizable in American pop culture (and American retailers) as the double-breasted wool peacoat that sailors have worn in some variation since the United States broke away from Great Britain.

That was, at least, until the Navy announced in August 2016 that it would do away with the heavy outerwear in favor of a less expensive black synthetic parka, a change that would take effect in 2020. But in evaluating the branch’s fiscal year 2018 budget, the House Armed Services Committee decided it may want to save the beloved peacoat — not because of its iconic status, but to preserve America’s “domestic textile industrial base,” USNI News' Sam LaGrone first reported on July 6.

“As the Department of the Navy works to streamline military uniforms, the committee notes the importance of a stable domestic textile industrial base to produce garments such as these,” the House Readiness Subcommittee wrote in a markup as part of the National Defense Authorization Act considered by the House Armed Services Committee last week. “[We] encourage the Department to take into consideration, when making decisions about uniform changes, such an impact upon the domestic textile industrial base, including the small businesses that provide critical contributions.”

Right now, the Navy’s iconic peacoat is manufactured by a handful of textile companies in the Northeast, one of which, Sterlingwear of Boston, in Massachusetts, was awarded $48 million dollars in 2015 to continue manufacturing the coats through 2020. Peacoat manufacturers claim they could end up slashing nearly 300 jobs should the Navy make the switch, The Providence Journal reported.

“We believe that the Navy was unaware of the collateral damage of their decision to phase out the wool peacoat by replacing it with a 100 percent synthetic parka,” David Fredella, Sterlingwear vice president and chief operating officer, told the East Boston Free-Times Press. “It will not only result in the closing of manufacturing facilities and lost jobs, but it will also impact the ability of the woolen trade industry to satisfy other military wool clothing requirements.”

But it’s not just about the jobs saved or the health of the industry, according to Jack Foster, a self-described Navy brat and the director of marketing at Sterlingwear. “There’s a lot of history with that garment, and a lot memories with that garment,” Foster told The Providence Journal. “I remember my father when he was shipped out, everyone would line up on the deck of the ship, dressed in their peacoats.”

To be honest, we’re not convinced Congress cares so much about the textile industry as it does about making sure that the Navy doesn’t look ridiculous in these dorky-sounding parkas. Remember aquaflage? Say what you will about the antiquated dress whites, but clearly the contemporary Navy can’t be trusted to dress itself.

Task & Purpose reached out to the Navy for comment on the issue, and will update as more information becomes available.