A Marine critically injured when lightning struck an MV-22 Osprey on a military flight line in North Carolina last week... 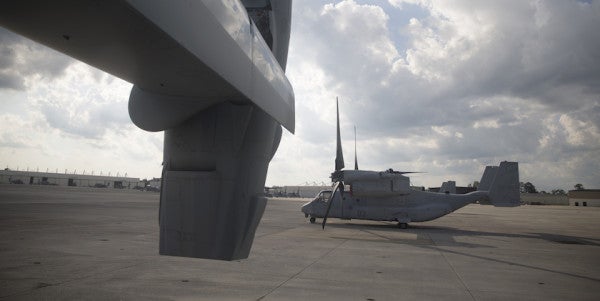 A Marine critically injured when lightning struck an MV-22 Osprey on a military flight line in North Carolina last week has been declared brain-dead, Military.com reports.

Cpl. Skyler James, a tiltrotor mechanic assigned to Marine Medium Tiltrotor Squadron 261, and an unidentified Marine had been working on an Osprey at Marine Corps Air Station New River in North Carolina on June 11 when lightning struck the aircraft.

The pair were rushed to Camp Lejeune Naval Hospital for treatment. While the unidentified Marine was quickly released, James was then transferred to UNC Health Center for additional treatment.

In a news release on June 17, Marine officials James had died following “several days of treatment and evaluation.”

However, a spokesman for 2nd Marine Aircraft Wing subsequently toldMilitary.com that the state of North Carolina had declared James brain dead on June 16 and that he remains on a ventilator.

Technically, the Marine Corps wasn’t wrong in its initial assessment. According to North Carolina law, brain death is defined as “irreversible cessation of total brain function” and “may be used as a sole basis for the determination that a person has died.”

The incident occurred as Marines were clearing the flight line after reports of a lightning strike nearby. Military.com notes that it is standard protocol to stop activity when lightning strikes within five miles of a flight line.

James hailed from Sonoma, California and had joined the Marine Corps in March 2014. He was promoted to corporal in October, according to the news release.

“Cpl. Skyler James was a hardworking Marine full of work ethic, ability, and drive,” Lt. Col Stephen Pirrotta, commanding officer of VMM-261, said in a statement to. “He was quick to smile and ready to accept any maintenance challenge on the flight line with a demeanor that allowed for easy interaction between his peers and superiors, alike.”

“This was a tragic accident,” he added “Corporal James will be sorely missed by the Raging Bulls. His family is in our thoughts and prayers.”