Update, July 23: WNCN News in North Carolina tracked down the family of the man who received a first-class plane ticket... 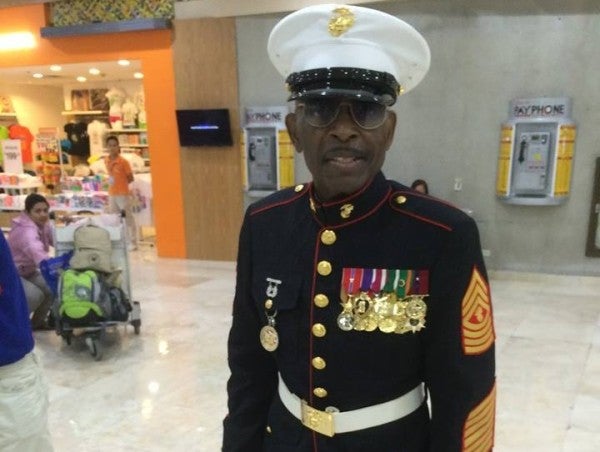 Update, July 23: WNCN News in North Carolina tracked down the family of the man who received a first-class plane ticket from NFL running back DeAngelo Williams last week. The man was wearing some seriously suspect dress blues which drew questions from the military community and allegations of stolen valor from many, including this reporter.

In a tweet reflected below, Business Insider's Paul Szoldra speculated that perhaps he was a real Marine who suffered from dementia and he was right. WNCN confirmed that the man was 77-year old James Wesley Bolden, a retired Master Gunnery Sergeant who is hampered by the debilitating condition.

I would like to apologize to Master Gunny Sgt. Bolden and his family, and thank them both for their service. Semper Fidelis.

A couple of days ago, Carolina Panthers running back DeAngelo Williams posted a photo to his Facebook page showing a man in dress blues waiting at an airport terminal.

“He just doesn't know it yet but he will be sitting in this seat when he boards the plane I always give up my 1st class seat! #isalutethetroops!” Williams wrote.

But for many veterans and members of the military community, Marines especially, the picture sent up red flags.

There was something off about the man’s uniform. Medals out of order, a shooting badge on the right side, which isn’t a thing, and Marines never wear their covers inside. Plus, who the hell flies in their dress blue alphas?

“I'm gonna be honest here. He looks like a ‘faker,’” one man commented on Williams’ post. “I'm a Marine and he is wearing his cover indoors. NO MARINE WEARS THEIR COVER INDOORS. Something is fishy DeAngelo Williams, don't give up your seat to him!”

I largely reserved judgement. It certainly seemed suspect, but the picture was far too fuzzy for me to critique him closely. Maybe he forgot to take his cover off — it’s happened to me. More realistically, maybe he was escorting the remains of a fallen service member somewhere and felt that he was on duty in that capacity, requiring him to wear his cover.

Stolen valor is nothing new, and attempts to stop it have done little from stemming the practice of going to a thrift store, buying some old uniforms, and going around playing G.I. Joe, pretending to be a war hero. In 2005, Congress passed the Stolen Valor Act, which made the practice illegal. But in 2012, the Supreme Court declared the law unconstitutional, saying it inhibited freedom of speech. President Barack Obama signed a new constitution-friendly version of the bill into law in 2013, making it illegal only if there was an intent to obtain monetary gain.

There’s certainly something mentally off with the people who go around pretending to be service members. It’s shameful, and it robs the men and women who actually served of their sacrifice.

As for the man Williams gave his ticket to, the website Guardian of Valor posted an update with a better photo, and as far as I’m concerned, the verdict is in — this guy is a fraud.

The uniform is totally off, as you can see in the top photo. There is a pistol shooting badge on the left side, the medals are out of order, and there's a weird device on his Navy-Marine Corps Achievement Medal.

What’s funny is that these guys always pretend to be war heroes. If they just said they were an administrative specialist and a sergeant with modest medals and decorations, they’d probably get away with it. Instead they think they can fool actual members of the armed forces by wearing shit they think looks cool. Foolish.

It’s a damn shame, really. It’s always such a great story when celebrities and public figures give their first-class seats to service members. Amy Adams, the actress, made headlines last month when she did it quietly on a flight from Detroit.