A Peaceful Tactic For A Militarized Police Force 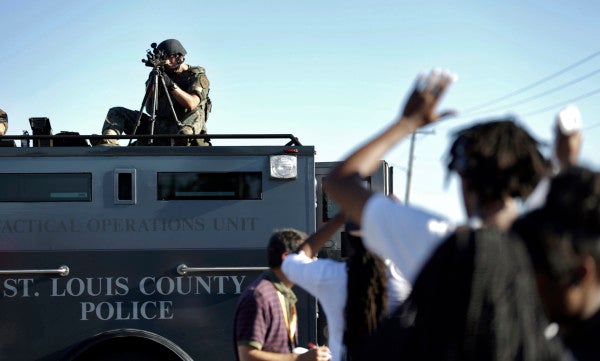 The U.S. Army/Marine Corps Counterinsurgency Field Manual, when discussing security operations, states that “sometimes, the more force used, the less effective it is.” According to journalist Radley Balko and his recent book “Rise of the Warrior Cop,” SWAT recruitment ads, fighting-crime politics, and Department of Defense weaponry have spawned a storm trooper mindset within many police departments and resulted in a more heavy-handed approach toward enforcing the law. In recent decades, the inception of SWAT teams — along with America’s war on drugs, war on crime, and war on terror — have encouraged many police departments to develop an “at war” mindset, resulting in a more militant approach toward daily law enforcement.

For example, the recent allegations of excessive force against the Ferguson, Missouri, police department demonstrate how showing too much force is like pouring gas on a fire, inciting a reciprocal blaze of violence and threatening the safety of police officers and the citizens they have sworn to serve and protect.

Phillip Carter, a former Army officer and now a senior fellow at the Center for a New American Security, wrote in August about how the Ferguson Police Department’s militant show of force through body armor, assault weapons, and armored vehicles reminded him more of his combat tour in Iraq than traditional American law enforcement. “…heavy-handed response to protests arguably caused the situation to escalate,” Carter wrote. “A lesser-armed police department,” he insisted, “might have used less confrontational, more community-oriented policing strategies to restore order, and been far more effective (and efficient) in the long run.”

I am not arguing universally against the police’s use of force. I deeply respect law enforcement officers, which include members of my own family and former colleagues from the Marine Corps, and understand that aggressive tactics are sometimes necessary for police officers, service members, and other types of protectors. Yet, ultimately keeping the peace — as the USMC counterinsurgency manual suggests — requires an in kind response to the violence perpetuated.

When considering use of force and response in kind, consider this statistic from Balko’s book: Less than one-eighth of 1% of homicides in the U.S. are committed with a military-grade weapon. Consequently, the need for a military-grade SWAT team in every American city and town is hard to justify and might even incur more violence. Balko cites several examples of innocent bystanders and innocent suspects killed by aggressive SWAT raids that now occur between an estimated 50,000 to 80,000 times per year compared to just 3,000 raids per year in the early 1980s.

In his bestselling book, “The Gift of Fear,” security expert Gavin de Becker writes about the “dignity domino.” If this inherent human quality (dignity) falls like a domino an escalation in violence is more likely. Yet, through more peaceful expressions of courtesy and understanding, this domino is more apt to stay upright and not fall to violence.

Despite the increased militarization among police departments, many cops, service members, and protectors still understand the dignity domino and how wounded pride and fractured egos can result in violence.

De Becker’s argument for courtesy and understanding corresponds with Joseph McNamara’s approach to law enforcement. McNamara, the former police chief for Kansas City and San Jose, according to a recent Wall Street Journal article, “instituted a form of policing that called on officers to be more sensitive to the people they policed… and to be respectful of the citizens they were paid to protect.” The results of his progressive effort, made McNamara, “one of the most consequential American policemen of the past 50 years” and well-respected by the citizens he and his police departments swore to protect.

Here’s a personal story about the dignity domino and not taking the bait:

A few years ago, I accompanied a public figure to India for a special event. While at a crowded gala, an inebriated and aggressive individual attempted to force an encounter with my protectee. Stepping between my protectee and the unknown individual, I asked the stranger, “Can I help you sir?” He screamed back with spit flying and his finger pointed towards my protectee, “Who is that man! Who is that man!” I then said, “Sir, could you please step aside.” Right then, a handful of sober colleagues pulled the irate man to the back of the room. A minute later, the venue’s security chief approached me and warned, “You should not have done that. You embarrassed him and he is a very important man.”

To say he was important is an understatement. As I squeezed through the crowd to apologize, I saw his dignity domino shake with every humiliating scream toward me and his surrounding minions — a scene I’ll never forget. Before his domino could fall, however, I said, “I’m sorry sir,” and I left the party, posting outside as my partners covered the protectee inside. In removing myself, I extinguished the man’s fury and handed his ego a big victory. In my absence, his dignity regained strength and his pride slowly recovered. The party soon returned to normal and my protectee was safe and secure just like the angered man’s dignity.

As a protector, I understand how different my mission can be compared to SWAT teams and soldiers. Yet, at a fundamental level, we all deal with people and their emotions. Through understanding the dignity domino and treating others with respect, especially when they may not deserve it, we can breathe less oxygen onto the fires and gain security for those we promise to protect.