Over the past year, the debate over law-enforcement reform — particularly over the use of deadly force — has risen... 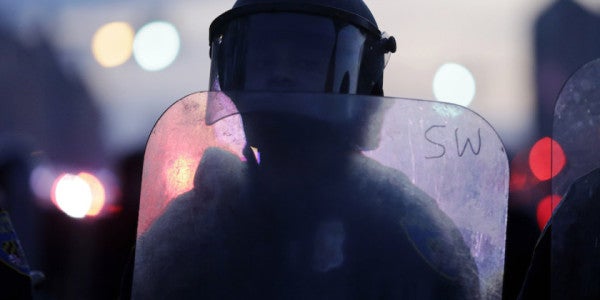 Over the past year, the debate over law-enforcement reform — particularly over the use of deadly force — has risen to a fever pitch. Protests against police violence, particularly in Ferguson, brought the specific issue of police militarization to the forefront of the American public’s mind. Compounding this was the notion that law enforcement agencies were getting equipment for little to no cost from the Pentagon’s controversial 1033 program.

Then in May, President Barack Obama announced that the Pentagon would be prohibited from transferring certain equipment to police agencies, such as .50 caliber rifles, tracked armored vehicles, grenade launchers, and bayonets. For other firearms, armor, and vehicles, agencies need permission from local governments and are required to undergo related training. But these measures belie a deeper understanding of police use of military-style equipment, and why the 1033 program doesn't necessarily have the best interests of law enforcement at its heart.

The current demand for surplus military gear in law enforcement stems from a variety of factors. The development and proliferation of police tactical units — colloquially known as Special Weapons and Tactics, or SWAT; from the first such unit formed in Los Angeles — has been fueled by the operational demands of American drug policy and fears about terrorism in the post-9/11 world. But it’s important to understand the original purpose of SWAT teams, which was to deal with situations of extreme violence. The Los Angeles Police Department SWAT team confronting the Symbionese Liberation Army in 1974, the FBI Hostage Rescue Team’s siege of a white-supremacist militia compound in 1985, the hostage situation in a Sacramento electronics store in 1991, and a North Hollywood shootout with heavily armed bank robbers in 1997 provide examples of the types of situations that police tactical units were originally created to resolve. But increasingly, these teams are being deployed to serve a huge number of drug warrants, and have begun to assume more duties previously associated with regular uniformed officers.

The 1033 program’s controversial nature has obscured a fundamental question: Is the military gear that law enforcement receives through the program really any good? It’s important to understand that 1033 is also meant to be a cost-saving measure meant to recycle excess equipment the military doesn’t want or need. Innocuous items like tables, computers, or radios are one thing, but vital gear like firearms and vehicles shouldn’t be military castoff. Worn-out and phased-out rifles the military doesn’t want to deal with anymore are not the best options for police departments that will rely on them in violent encounters, as they may be more prone to malfunction and reduced performance.

Similarly, the Mine Resistance Ambush Protected vehicles, commonly shortened to MRAPs, that are being offered through 1033 aren’t the best fit for police either. The MRAP program was an interim solution, meant to provide greater protection against IED strikes that were destroying up-armored Humvees. But the interim nature of the program meant the MRAP vehicles have their issues — extreme weight, low fuel economy, and high operating costs chief among them. But perhaps of greater concern is the high incidence of rollover accidents with the MRAP design, and the lack of training available in the safe usage of the MRAP by law enforcement. Tim Dees, a former 15-year police veteran, explains in a column for PoliceOne, a law enforcement news site:

There is a reason that rollovers are a special concern. Of 66 MRAP accidents overseas between November 2007 and June 2008, 40 were rollovers caused by rough roads, road shoulders collapsing, bridge failures or bad driving. These vehicles have a high center of gravity, and taking them on an incline of 30 degrees or more can cause them to topple.

Imagine the repercussion of an incident involving a SWAT team crashing in a rollover on the way to a call, or getting trapped inside their own armored vehicle. The MRAP issue will soon be compounded by the fact that the MRAP is being phased out of active service in anticipation of the results of the Joint Light Tactical Vehicle Program, leaving the Army and Marine Corps with plenty of MRAPs they may want to divest from service.

Conversely, some equipment derived from military use is proving valuable to law enforcement. As special operations forces began to adopt shortened carbine variants of the AR-15 family of rifles in early 2000s, the concept of the “patrol carbine” gained popularity with police. The reason handguns are the primary deadly force weapon for law enforcement has little to do with their actual capabilities. Author Chris McNab explains in his book examing the history of lethal force in American policing, “Deadly Force: Firearms and American Law Enforcement:”

The primary reason that officers are issued with a handgun as standard is not its qualities as a weapon, but its portability and public acceptability. In short, handguns are easy to carry and don’t look too threatening.

While one of the issues at the heart of police militarization involves the public perception of certain equipment, there comes the act of balancing that concern with ensuring officers have effective equipment. Handguns are one of more difficult types of firearms to shoot proficiently, and most handgun calibers found to be practical for police use are underpowered in terms of terminal ballistics. The patrol carbine as a replacement for the 12-gauge shotguns commonly carried in police cruisers gives officers a more effective deadly force option. Rifles like the AR-15 have much simpler weapons manipulation techniques than a shotgun, as well as a better ammunition capacity, less severe felt recoil, and a greater ability to hit targets at range. With the development of new accessories and techniques in in the carbine world, it is fast becoming a better choice for law enforcement.

Another potential area for improvement is load carriage. For decades, the “Sam Browne” leather gun belt has been almost universal among American law enforcement. But as policy and technology has evolved, the leather belt is showing its age. An officer may be expected to carry his sidearm, radio, spare magazines, handcuffs, Taser, OC spray, baton, evidence collection materials, and the list goes on. This a lot of weight to carry on just a belt, and it may ultimately be contributing to long-term injuries for officers on patrol duty. There have been studies regarding the link between duty belts and back injuries reported by officers, and it’s clear a better solution is needed.

There have been great advances in load-bearing equipment in the past 15 years of combat. There are dozens of chest rigs, H-harnesses, and vests on the market that provide a more comfortable solution for carrying day-to-day gear. Military innovations in uniforms could be applied as well: the development of breathable, fire-resistant combat shirts could applied to patrol uniforms, enhancing officer comfort and safety. Some tactical nylon companies have noticed this, and uniforms and load-bearing kits focused on law enforcement roles, like active shooter response ,have begun to enter the tactical gear market.

Ultimately, the greater considerations may be policy and training, rather than equipment when it comes to police militarization. Terminating the 1033 program doesn’t end problems between local police departments and communities; much of that equipment is available from other legitimate sources. There are limited applications for camouflage fatigues, M4s, and MRAPs, enough that concerns over military appearance could be tempered. But perhaps it would be better for law enforcement to get such equipment from the private tactical industry, which has begun to offer kit tailored for police. And it’s important to recognize that 1033, for all the potentially useful gear it could offer, does not provide a police agency with what is most important to policing: the insight into whether this equipment is truly needed to serve their community, and the training to do so effectively.