Your local law enforcement agencies could have tracked armor, .50 caliber machine guns, and bayonets soon. In theory, at least.... 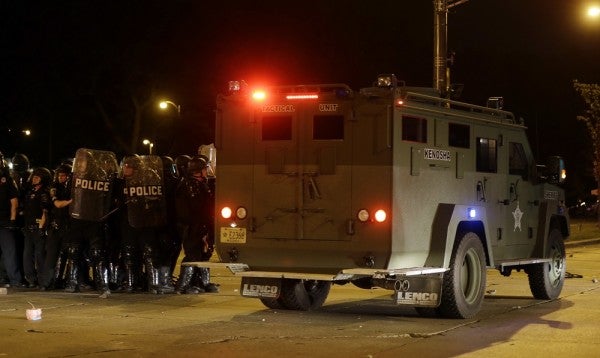 Your local law enforcement agencies could have tracked armor, .50 caliber machine guns, and bayonets soon. In theory, at least.

House Republicans have introduced a bill aimed at restarting the transfer of military equipment to local and state law enforcement agencies under the federal 1033 program, according to the Washington Examiner. The program has come under fire in the past, most notably in 2014 after the protests in Ferguson, Missouri, when military vehicles and heavily armed police were seen rolling through suburban streets.

The “Protecting Lives Using Surplus Equipment of 2017” or PLUS Act was proposed by Rep. John Ratcliffe, a Texas Republican, and would undo most of a 2015 Obama executive order that prohibited federal agencies from providing local law enforcement with certain equipment. The bill would prohibit any regulation, rule, or policy issued after May 15, 2015, that limits the sale or donation of surplus property from the federal government to state and local law enforcement agencies. This would mean that the restrictions imposed under President Obama in 2015, would be lifted.

Related: What The Military Got Right, America’s Police Are Still Getting Wrong »

The list of equipment still prohibited under the 2015 executive order includes: tank-like tracked armored vehicles that provide ballistic protection to their occupants; certain camouflage uniforms, but not desert, woodland, or solid color uniforms; bayonets; arms and ammunition of .50-caliber or higher; grenade launchers; and weaponized aircraft or vehicles of any kind.

Coincidentally, mine-resistant ambush protected vehicles, or MRAPs, a common sight during the latter years of the wars in Iraq and Afghanistan, have found their way into the hands of local law enforcement since 2015, because while they are heavily armored, they are wheeled, not tracked. However, as “controlled” military hardware under federal law, the transfer of MRAPs to state and local police is still limited.

Other military items that are controlled — meaning the law enforcement agency requesting the gear must justify why they need, say, an MRAP in Garfield, New Jersey — are: armored personnel carriers; Humvees; 2.5-ton and 5-ton trucks or any vehicles with a breaching or entry apparatus; command and control vehicles; specialized firearms and ammunition; explosives and pyrotechnics such as flash bangs; battering rams; police batons; and riot shields and helmets.

Ratcliffe introduced his bill last year, but it didn’t get far, the Examiner reported. But now, with the backing of a Republican-controlled Congress and a presidential administration that’s been vocal in its support for equipping local police, the legislation appears could go much further, which means we might soon see .50-cals among the equipment transferred to local law enforcement.

Critics argue that heavy military hardware is inappropriate for domestic law enforcement, in part because police escalation of force differs so dramatically from military training and practices. Police training “by and large does not prepare policemen to manage high-stress situations the way the military prepares its soldiers,” two MIT researchers wrote in a Washington Post analysis of police militarization last year. “Police training tends to be short and classroom-based, and rarely emphasizes deescalation.” Ironically, the issue with police militarization may not be that there’s too little or too much of it, but that it’s not the right kind of militarization.