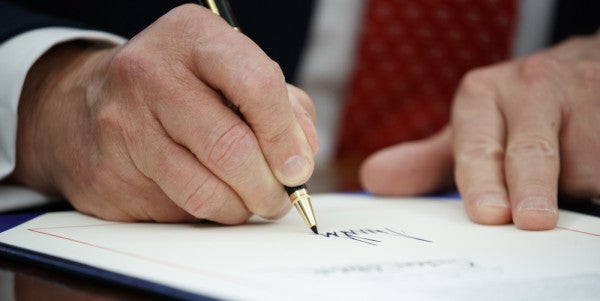 On Monday morning, President Donald Trump signed an updated executive order reissuing his controversial travel ban on refugees and passport-holders from several Muslim-majority countries. The revised order was designed to withstand legal objections after a barrage of court challenges complicated the slipshod rollout of his original travel, according to the New York Times.

With Washington crapping the bed over the Trump administration’s connections with Russian officials during and after the 2016 campaign, chances are the revised travel ban will face less political scrutiny than Trump’s previous order. Here are the most important morsels to note, pulled from draft documents prepared by the Trump administration and published by Just Security in the hours before the president authorized the new travel restrictions.

1. Iraqi citizens are no longer subject to the ban.

Trump’s initial travel ban included a blanket prohibition on citizens and nationals from seven countries: Iraq, Iran, Sudan, Syria, Libya, Somalia, and Yemen. The inclusion of Iraq, one of the U.S.’s essential allies against the Islamic State, frustrated vets who had worked with “local national” interpreters and soldiers, many of whom have sought a better life in America. (See more on their plight further below.) It also angered Iraqi lawmakers, spurring them to propose a reciprocal travel ban against U.S. citizens, including active service members and military contractors. While Iraq’s prime minister had promised that his government would not retaliate against Washington for its ban, the move could have significantly complicated Secretary of Defense James Mattis’ potential plans for a troop hike in Iraq and Syria.

“On the basis of negotiations that have taken place between the Government of Iraq and the U.S. Department of State in the last month, Iraq will increase cooperation with the U.S. Government on the vetting of its citizens applying for a visa to travel to the United States,” according to the document published by Just Security. “As a result of this increased information sharing, Iraqi citizens are not affected by the Executive Order. Of course, all normal immigration processing requirements continue to apply, including the grounds of inadmissibility that may be applicable.”

Related: Iraq Will Be Removed From Trump’s Travel Ban List, And We Have A Few Good Men To Thank »

Trump’s first draft order, issued in January, was met with confusion across federal agencies: Does this apply to green-card holders? What about those with multiple passports?

3. There’s a pathway for interpreters who served alongside U.S. troops.

Trump’s initial travel ban was met with an outcry from vets who were furious that the Afghan and Iraqi interpreters who assisted ground forces in those countries might be prohibited from entering the U.S. The Trump administration quickly backtracked and amended the ban to rectify their mistake, and the new executive order contains wiggle room for nationals from the six target countries who have earned a chance at a new life in the U.S.: “DHS and the Department of State have the discretionary authority, on a case-by-case basis, to issue visas or allow the entry of nationals of these six countries into the United States when a national from one of the countries demonstrates that the denial of entry would cause undue hardship, that his or her entry would not pose a threat to national security, and that his or her entry would be in the national interest.”

It’s hard to overstate how many Iraqi and Afghan interpreters and fixers fall under the “national interest” rubric. Just ask Matt Zeller, a former U.S. Army intelligence officer who formed a close bond with the Afghan interpreter who saved his life in April 2008. “If we want to get really serious, I’m not supposed to be here today. What if Janis hadn’t saved my life?” he told Task & Purpose in January. “What if 12 years ago when he was first recruited to be a translator, he thought the Americans were actually liars and didn’t keep their word? I don’t think he would’ve signed up to work with us, especially if he had known the profound danger he’d be placing his family in.”

4. It’s not just terrorism the Department of Homeland Security is looking for.

While the primary focus of the travel ban is protecting America from foreign terrorism, the documents also contain an added focus on violence against women. The draft document states that the DHS will publish information on “information regarding the number and types of acts of gender-based violence against women, including so-called ‘honor killings,’ in the United States by foreign nationals.”

This may seem like an absurd inclusion, but it’s not. According to a 2015 Department of Justice report based on the FBI’s Uniform Crime Reporting data, an estimated 27 Americans were victims of honor killings, although there’s currently no reliable data to measure the prevalence of so-called “honor violence,” which includes forced marriage, domestic violence, genital mutilation, and outright murder. According to the report, 93 percent of the victims were female, and 91 percent of those victims were executed for being “too westernized.”

The new order includes a ramp-up period that hopefully won’t produce the kind of anarchy that struck airport customs lines after the president’s first ban attempt. But even if enforcement goes off without a hitch this time, opponents of the ban are unlikely to give up their legal challenges. As Newsweekreports, the order will face legal obstacles surrounding its efficacy and necessity in the first place:

This more circumscribed, orderly version does not tackle some of the issues that prompted courts in Washington and California to issue a nationwide stay of the first order. The White House has struggled to prove the order is necessary, for one. On Monday, officials released an FBI assertion that there are 300 open terrorism-related investigations of people who entered the United States as refugees. But that they said number reflects the entire universe of people who at one point were refugees, not just people from the six countries targeted by the ban. And the Justice Department refused to provide further information or a breakdown of where the people under investigation hailed from or their current immigration status.

We’ll likely know within a few weeks whether the travel ban will survive another salvo of legal challenges in lower courts. And if it fails? Well, third time’s a charm.