Iraqi Refugee Turned US Marine Joins The Fight Against ISIS

In 2009, Ali J. Mohammed’s sister was working as translator for the U.S. military in Baghdad, Iraq. He was just... 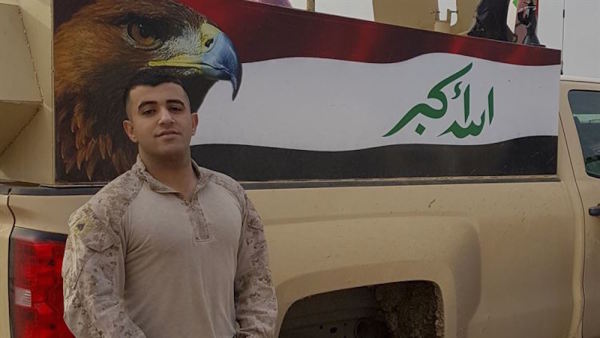 In 2009, Ali J. Mohammed’s sister was working as translator for the U.S. military in Baghdad, Iraq. He was just 16 when his family began receiving threats from extremists, forcing them to flee their home and seek asylum in the United States.

Four years later, he graduated from high school and enlisted in the Marine Corps, inspired by the work of his sister.

“Seeing her work so closely with these Americans, how much she trusted them and seeing how much they wanted to help us made me idealize them as a child,” Mohammed told the Marine Corps. “It is part of the reason I decided to join.”

Now, 23, he has returned to Iraq, this time as a corporal deployed in the fight against the Islamic State. Though his MOS is in supply, he primarily serves as an Arabic translator.

“America is my home, but Iraq is my homeland,” Mohammed added. “My biggest motivation right now is to help drive these extremist groups out of my home land, and being able to do that as a United States Marine is the most rewarding thing I could have asked for.”

The Marine Corps published his story just as President Donald Trump moved forward with a ban on visas issued to people living in a number of countries with Muslim citizens, including Mohammed’s native Iraq. Some news outlets, as a result, are speculating that the Pentagon meant this as a jab at Trump’s decision.

From refugee to #Marine. @USMC Cpl Ali J. Mohammed takes the fight to the doorstep of those who cast his family out.https://t.co/oSXWGrzsL7 pic.twitter.com/UVlWsaESic

“The fact that the Department of Defense decided to highlight the story of Cpl. Ali Mohammed hours after reports that President Trump is expected to ink a temporary ban on most refugees did not go without notice,” NBC reported.

Task & Purpose reached out to the public affairs office at 3rd Battalion, 7th Marines to ascertain Mohammed's citizen status but an officer was unavailable for comment.

According to Pentagon spokesman Navy Capt. Jeff Davis. there are roughly 5,000 non-U.S. citizens who enlist annually, with an average of 18,700 serving on active duty. It’s unclear how many are from Iraq, Syria, Iran, Libya, Somalia, Sudan, and Yemen — the seven countries affected by Trump's ban.

CORRECTION: Due to an editing error, an earlier version of this article’s headline implied Ali J. Mohammed may be unable to re-enter the country at the end of his deployment. The headline was changed because the details of his immigration status are unknown as well as how the executive order would impact him. (Updated Jan. 30, 2017 at 4:39 p.m. EST)