Why Are People Maddened By Manning And Not Cartwright?

Former President Barack Obama issued pardons and commutations at a historic clip, eclipsing the number of issued by any prior... 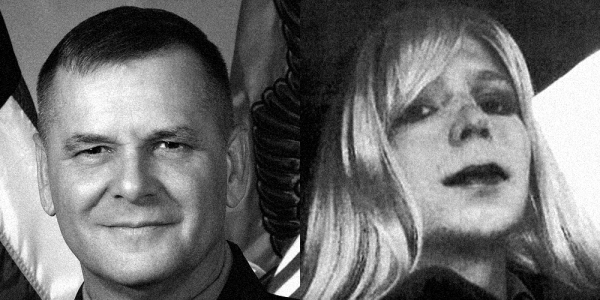 First, it must be noted that there is a difference between a pardon and a commutation. A commutation “reduces a sentence, either totally or partially, that is then being served, but it does not change the fact of conviction, imply innocence, or remove civil disabilities that apply to the convicted person as a result of the criminal conviction.” While a pardon is an “expression of the President’s forgiveness” and is removes the conviction from the individual's record.

In his most-recent grant, Obama commuted the sentence of Pvt. Chelsea Manning and pardoned retired Marine Gen. James Cartwright. In short, Cartwright will have his record purged of any criminal conviction. Manning’s sentenced will only be reduced, but Manning will still have suffer the other consequences of a criminal conviction, including a dishonorable discharge that will cut off all veterans benefits.

Manning was convicted in August 2013 of disclosing a massive cache of classified information to Wikileaks, including classified field military reports and State Department cables. Manning was sentenced to 35 years confinement, reduction to private, and a Dishonorable Discharge from the Army. Manning was arrested in Iraq in May of 2010 and has been held in confinement to to this date.

Manning did not do well in the Army, beginning as early as bootcamp. Just before the classified information was sent to Wikileaks, Manning sent an email to her chain of command revealing she identified as a woman along with a photograph of her dressed as a woman. This was before Manning was living as a woman. Manning’s time in confinement has also been marked by a number of suicide attempts. She also recently began hormone treatment as part of her gender transition. While none of this excuses her actions, it puts into context some of the factors considered by the Obama administration in granting clemency in this case.

Manning’s sentence of seven years of confinement is not outside of historical norms. In the mid-1980s Marine Sgt. Clayton J. Lonetree was convicted of espionage for passing classified information to the Soviet Union. Lonetree was sentenced to 30 years in military prison. Then-commandant, Gen. Alfred M. Gray Jr., petitioned the Secretary of the Navy to have Lonetree’s sentence reduced to 15 years. His sentence was reduced and he was released from the United States Disciplinary Barracks after serving nine years.

Cartwright had an exceptional military career rising through the ranks to four-star general in the Marine Corps and serving as the number two officer in the entire military, vice-chairman of the Joint Chiefs of Staff. During Obama’s first termm Cartwright was known as the president’s favorite general. He retired from the Marine Corps in 2011. In June 2013 he was informed by the Department of Justice that he was under investigation for passing classified information to reporters about an alleged U.S.-Israel cyber attack on Iran’s nuclear program.

In October 2016, Cartwright pleaded guilty to lying to federal investigators relating to his leak of information about the Stuxnet computer worm to members of the press. He was set to be sentenced in January of 2017.

The reaction to Manning’s commutation has been overwhelmingly negative. Republican Sen. John McCain called it a “grave mistake that will undermine military discipline.” Similarly, House Speaker Paul Ryan called it “outrageous.” This could be viewed as partisan politics and a desire to take one final swipe at Obama as he leaves office, but then one would expect the same reaction to Cartwright’s pardon. That hasn't happened.

The negative attacks did not end with elected officials. Take the recent op-ed by David French were he excoriates Obama for pardoning Manning, because “good commanders know that soldiers trust them to reinforce the warrior ethos with effective discipline.” Notably absent from this diatribe is any mention of the crimes of Cartwright. As the vice chairman of the Joint Chiefs of Staff, Cartwright was the second ranking officer in the military, as such he is expected to lead by example, which is a cornerstone of the warrior ethos.

Not only did Cartwright reveal extraordinarily sensitive and classified information, but he then lied about doing so. How did this escape scrutiny? How does this not undermine military discipline when the average service member sees a senior general failing to live up to the principles of our military culture?

The negative reaction to Manning’s commutation and the deafening silence on Cartwright’s pardon reveal two distressing thoughts. First, that numerous Members of Congress, commentators, and Internet trolls are openly hostile to members of the LGBTQ community. And secondly, as the famous fictional swine Napoleon explained, “All animals are equal but some animals are more equal than others.”

Because in the end, both of these individuals illegally disclosed classified information. They both broke the law Manning, a young soldier; and Cartwright, a general officer with over 40 years of military service. We should expect more from a general officer, not less. Senior military commanders are expected to set and embody the standards expected of junior service members, not preach one set of standards then live by another. A leadership failure by a senior officers does more to erode good order and discipline than a private breaking the law. What are junior Marines supposed to think when a four-star general gets caught committing a crime and lies to try to get away with it? Maybe they can just ask some junior Soldiers how they view the same actions by former Army general and CIA director David Petraeus.

It’s easy for the likes of David French to criticize the president for “minimizing Manning’s crimes” and violating “his own obligation to men and women in uniform.” And to call Manning a traitor” a term that has legal significance and a crime Manning was not convicted of, nor could even be charged with said crime under the Uniform Code of Military Justice. But if Manning is a traitor to French, then Cartwright must also be a traitor. But French only takes issue with the junior soldier and says nothing of the general. It is both disingenuous and telling.

If you disagree with the actions taken by the president in both the Manning and Cartwright cases, so be it, reasonable minds may differ. But if you are outraged by one and silent on the other, you need to take a moment to reflect on what, if any, values you are drawing on to form your opinion.