Gen Neller Wants Marines To Lay Off The Sauce In 2017

Marine Corps Commandant Gen. Robert Neller has a list of resolutions for his Marines in 2017: “We need to drink... 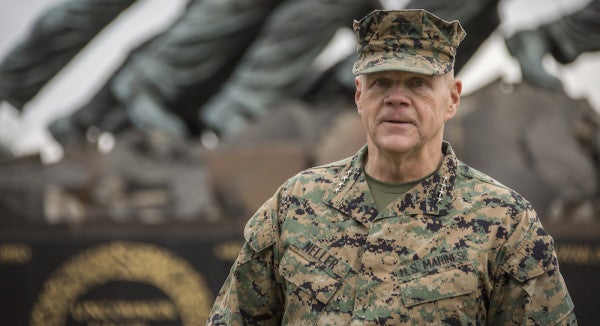 Marine Corps Commandant Gen. Robert Neller has a list of resolutions for his Marines in 2017: “We need to drink less, read more, and PT smarter.”

As for reading, they could start by reading his memo. (It's easy, guys. Just sound it out…) And PT? Well, we all know that Marines are the fittest branch already. But according to Neller, what everyone really, really needs to do is cut back on the boozing.

On Feb. 7, Neller released a list of the Corps’ 25 top tasks for 2017, along with a message outlining the areas where the service needs to improve. Titled “Seize the Initiative,” the memo is meant to serve as a guide for Marines, but it also stresses Neller’s plan to cut down on alcohol abuse and physical training injuries within the Corps.

In an interview with Marine Corps Times, Neller took a hard stance on the hard stuff.

“Alcohol – if it’s not respected and managed – it takes Marines into a bad place, whether it’s domestic abuse, sexual assault, suicide, hazing, DUI, or just general jackassery,” he said. “Normally the story starts … ‘Well, we were drinking tequila, you know,’ and the story kind of goes downhill from there.”

Neller goes on to say that he recognizes that drinking is a part of military culture, but he is concerned that many don’t realize how detrimental it can be to get drunk.

“If you believe that alcohol fuels a lot of this unacceptable, illegal, unauthorized behavior that causes people to not make good decisions, that’s kind of why I’m focusing on alcohol,” he said.

We’ll drink to that.