You smell that? That’s the tangy aroma of 242 years of sweat, blood, and alcohol-fueled tradition dating back to the... 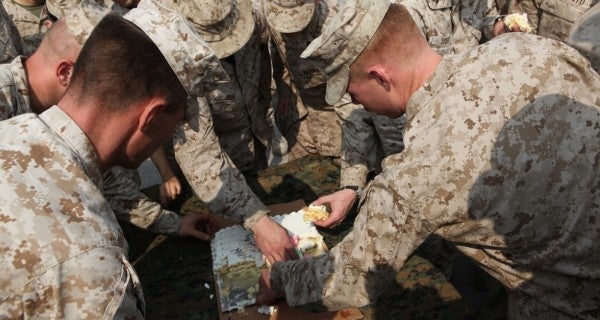 You smell that? That’s the tangy aroma of 242 years of sweat, blood, and alcohol-fueled tradition dating back to the formation of the Marine Corps by the Second Continental Congress. On Nov. 10, 1775, the Corps’ first piece of historical lore was written when Capt. Samuel Nicholas set up shop in Philadelphia’s Tun Tavern to recruit would-be jarheads.

In the more than two centuries since, Marines have gathered in every clime and place — at shitty hotels, in bars, on bases at auditoriums laced with streamers and balloons like some kind of ROTC-run prom on a budget, or in Fallujah during Operation Phantom Fury — to pay homage to their scrappy pub-crawling forebears with a birthday celebration. Like any (good) party, the Marines celebrate with boozy revelry — and there’s usually at least one gunnery sergeant who ends up so hammered he loses his pants. Oh, and there’s cake. But Marines being Marines, even the cake-cutting is steeped in ritual.

Commandant of the Marine Corps Gen. Robert B. Neller cuts a cake at a Marine Corps birthday ceremony at the Pentagon, Arlington, Va., Nov. 9, 2017. The ceremony was in honor of the Corps’ 242nd birthday.

After the cake is sliced with a Mameluke Sword (itself the recipient of a legacy dating back to the Barbary Wars of the early 1800s), the first piece is presented to the oldest Marine present, who then hands it off to the youngest Marine. This signifies the passage of experience and knowledge from salt dog to boot. Afterward the eldest Marine takes his piece of cake, emphasizing that senior Marines, as leaders, look out for their juniors before themselves. It’s a fitting tradition for a service that demands every member be a leader of Marines.

That said, it doesn’t mean there isn’t room for improvement.

We get it, traditions are sacred in the military (and among Marines, in particular), but maybe there are some other dichotomies the Corps could honor with that first slice of moto-cake? Starting with…

There’s an oft-quoted line from Navy Rear Adm. “Jay” R. Stark, that “Marines come in two varieties, big and mean, or skinny and mean. They're aggressive on the attack and tenacious on defense. They've got really short hair and they always go for the throat.”

Beyond being a moto-boner-inducing birthday speech from Nov. 10, 1995, the remark also rings true: Not every Marine is built like a dump truck or a tree-trunk throated ogre. Some have thin necks. That doesn’t mean they’re any less likely to lead a charge or swagger balls out into close-quarters combat and earn two Medals of Honor, to boot. Look’n at you, Smedley Butler.

As any hard-charger will tell you, the easiest way to determine a Marine’s “give a fuck level” is to check his fade — and just how many inches he has on top. Seeing as it’s the Marine Corps’ birthday, let’s honor both ends of the motivation spectrum and hand off that first slice of Semper Fi to the Marine with the highest of tights (going out on a limb and guessing it’s a comm battalion sergeant major). However, before he can pass the cake, sergeant major has to measure just how many inches top the crown of that low-fade rocking lance corporal (second award) who’s just gotten back home after his third overseas deployment.

“Hmm, 4.5 inches. Really Marine? — something something — it would behoove you — yada yada.”

While we’re on the topic of motivation, let’s acknowledge another time-honored, but unofficial tradition — non judicial punishment, aka, a ninja punch. Afterall, Marines have a reputation for being rough around the edges — even Chesty Puller once (allegedly) said: “Take me to the Brig. I want to see the real Marines.” Let’s just own it and have the Marine with the most Good Conduct Medals pass the first piece of cake to the devil dog with the most NJPs.

In all probability, the Marine with the most good cookies was the one standing opposite the other Marine during his last nonjudicial punishment, and it could be tense… might even lead to a drunken fight, and an NJP the following morning.

We all know at least one Marine who scored 99 on the ASVAB, and we know this because he will typically proclaim it loudly, and often. Usually to try to set himself apart from the horde of ASVAB waivers and Crayon eaters in the Corps — the orange ones taste the best. All joking aside, there’s a lot of smart Marines out there, or at least, smartass Marines. Instead of cake we can substitute with a multiple choice exam.

While every Marine is a rifleman, not everyone gets through the range on the first go… Or the second. How about we distinguish our unqs (short for unqualified and refers to Marines who fail to pass rifle qualification) by giving them the first piece of cake, which they then have to pass to that devil in the battalion with the longest chain of Expert Rifleman requalification clasps. To be clear, in this scenario the unq doesn’t get any cake. He has to go back to the range while everyone else drinks.

Like all service members, Marines get hoodwinked by sleazy off-base car salesmen peddling overpriced rides. “Hey lance corporal, you can totally afford a brand new F-150/Mustang/Charger/WhateverHooptieIsInRightNow on an E-3’s salary. Oh, you’re getting busted down to private? No problem, all you’ve gotta do is take out a loan…”

The post-9/11 military has changed a lot since the days of our forebears, from the all-volunteer service, to our longest period of extended combat operations. But one change has drawn consistent criticism from large swathes of the Corps: We’ve gone slap-happy with our awards process. Don’t think that’s true? During the height of the wars in Iraq and Afghanistan you could deploy with two ribbons (your National Defense and Global War on Terrorism Service Medals, which you kind of got just for showing up) and by the time you made it back stateside, you’d have at least five pieces of chest candy (sometimes referred to as the Chesty Puller starter kit), and even more once you toss in a Combat Action Ribbon and of course… a complimentary Navy Achievement Medal, because why the fuck not?

For this year’s birthday ball, instead of cake, how about we call the two Marines with the most and fewest Navy Achievement Medals (NAMs) to the front and conduct an impromptu award ceremony. This time the Marine with the most NAMs gets a Navy and Marine Corps Commendation Medal (for having the most NAMs.) The other Marine gets a Certificate of Commendation, 4.0/4.0 pro/cons and is informed he or she has duty the following morning.