The Marine Corps' official 243rd birthday message video dropped on Thursday, and it is motivating as f–k, to put it... 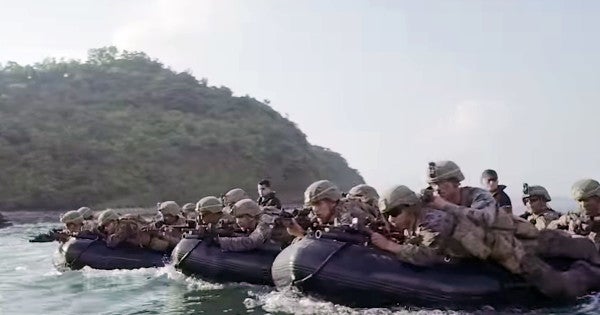 The Marine Corps' official 243rd birthday message video dropped on Thursday, and it is motivating as f–k, to put it bluntly.

The seven minute video mostly consists of a voiceover from Gen. Robert Neller, Commandant of the Marine Corps, talking through a story of a Marine's journey before, during, and after the Marine Corps that could describe just about anyone's time in the service.

“Think back to before you came into the Marine Corps,” Neller says. “At some point you saw or met a Marine and you thought, 'do I have what it takes to be one of them?'”

The video continues with footage from the oath of enlistment, then onto Marine recruits walking through the door of boot camp with the sign proclaiming, “through this portal walks the future of the United States Marine Corps.”

“You worked hard. Fighting, training, sweating, refining that warrior spirit. Earning that ,” Neller says, before continuing the story of this hypothetical Marine getting to their first unit, learning from the non-commissioned officers, earning promotions, and deploying.

“You were there with your friends and the rest of the unit. The sorrow, the joy… all of it became real. Not just lessons and stories from NCOs.”

The video also features appearances by Sgt. Maj. Ronald Green, the top enlisted Marine, and retired Sgt. Maj. John Canley, who was awarded the Medal of Honor in October for his actions during the Vietnam War battle of Hue.

The Corps celebrates its birthday as Nov. 10, 1775, in recognition of the Continental Congress authorizing “two battalions of Marines” for the defense of the naval vessels.