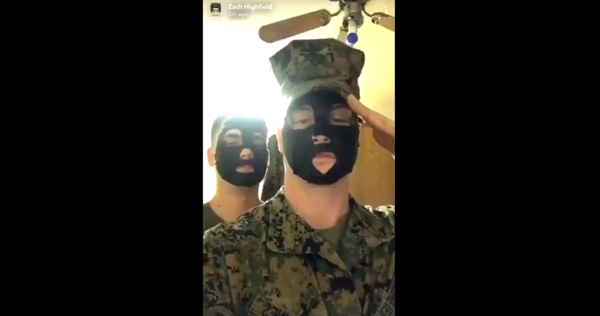 The undated clip, which was reposted to Twitter on Feb. 23, and has since gone viral, starts with one of the Marines saying “blackface” while the Marine in the foreground salutes the camera, and the Marine in the background says “hello monkey.”

This is Zach Highfield, he’s a Marine who is proudly displaying his bigotry by wearing blackface in his military gear. The man behind him who says “hello monkey” hasn’t been identified yet. Care to comment on this racist behavior @USMC? pic.twitter.com/mKPLetFrYs

The Marines in the video are assigned to 3rd Marine Aircraft Wing at Marine Corps Air Station Miramar in San Diego, a spokesperson for the command confirmed to Task & Purpose.

After being outed on social media, Highfield copped to his involvement in the video in an interview with KPBS, a local San Diego news station.

“It looks a lot worse than it is,” Highfield told KPBS, claiming that the two Marines were wearing charcoal masks.

“It was a bad mistake,” he told the station. “We had no intention to offend.”

The Marine Corps for its part, isn't likely to let the apology be the end of it. A 3rd Marine Aircraft Wing spokesperson told Task & Purpose that an investigation “has been initiated to determine the facts and circumstances surrounding the content.”

“Our leaders are committed to maintaining an environment of professionalism, dignity, and respect,” the spokesperson said. “[The] 3rd MAW takes all allegations of discriminatory behavior very seriously as they stand in stark contrast of our core values of honor, courage, and commitment and do not reflect the discipline and professionalism of the Marines and Sailors of 3rd MAW.”