The Marines Threw This Major To The Wolves Over A Massacre That Didn’t Happen. Now His Record Is Clean

A Marine officer who was fired after false rumors that his special operations unit massacred Afghan civilians has been vindicated. 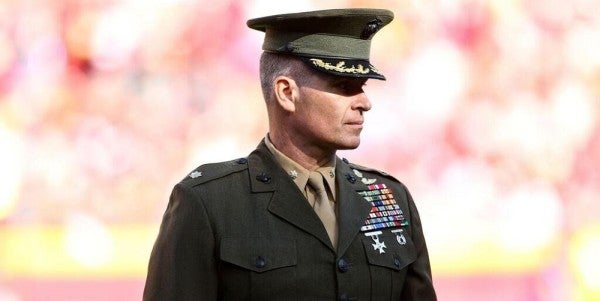 A Marine officer who was fired after false rumors that his special operations unit massacred Afghan civilians has been vindicated.

The Board for Corrections of Naval Records recently removed two adverse fitness reports from retired Maj. Fred Galvin's record: The first one came as a result of a March 2007 incident, during which he led Marine Special Operations Company Foxtrot in Afghanistan; the second came after he was relieved in 2011 for questioning a lieutenant colonel in Afghanistan who allegedly said he was “willing to sacrifice the lives” of Marines under his command.

The board recommended Galvin be considered for promotion to lieutenant colonel; however, the board also ruled it was “premature” to rule on Galvin's request to return to active duty. He was forced to retire as a major after serving more than 26 years in the Corps.

“Speaking for the Marines and corpsmen of Marine Special Operations Company Foxtrot, the senior civilian leaders from the Pentagon who composed the board made a courageous decision and their 12 page report reflects their integrity and thoroughness from reviewing all of the facts in this case,” Galvin told Task & Purpose on Monday.

Andrew deGrandpre first documented in a 2015 Military Times series how Galvin and the other members of Marine Special Operations Company Foxtrot were the victims of a miscarriage of military justice. DeGrandpre now works for the Washington Post.

On March 4, 2007, 30 members of Marine Special Operations Company Foxtrot were ambushed in Afghanistan. Although the Marines reacted correctly, rumors spread within half an hour of the attack that they had indiscriminately shot and killed Afghan civilians, the board found.

Then-Afghan President Hamid Karzai condemned the Marines and anti-American protests exploded in Afghanistan. Some media outlets reported hundreds of people had been killed, though no bodies of civilians were ever recovered, according to the board's findings.

Compounding the confusion, an Air Force colonel assigned to investigate the incident believed accounts from Afghan civilians rather than the Marines and recommended that four of the Marines be charged with negligent homicide – a subsequent court of inquiry found the colonel's “unbalanced approach to his investigation resulted in inaccurate conclusions,” the board found.

Noting that Galvin was later exonerated for the Marines' response to the ambush, the board found the March 4 event had “corrupted the judgment of the ” and set into motion a series of events that contributed to the failure of subsequent missions and gave the appearance that Galvin had lost operational control.

“The Board determined the enemy information operation and responses of senior leaders were the proximate cause of the MSCO-F [Marine Special Operations Company Foxtrot] redeployment and actions taken against Petitioner were 'collateral damage,'” according to the board's Jan. 2 decision.

Galvin was relieved of command again and received a second adverse fitness report following a June 6, 2011 incident, while he was serving as the operations officer for 3rd Reconnaissance Battalion in Helmand province, Afghanistan, the board found.

When a company was ambushed, the battalion commander initially asked Galvin what type of artillery and air support to use, but the lieutenant colonel eventually decided, “No additional fire support would be ordered and complained that the Marines needed either to maneuver forward or disengage,” the board found.

Discussing the ambush with the battalion commander the following day, Galvin told the lieutenant colonel should have used weapons with a lower risk for collateral damage to provide the fire support that the Marines requested.

When Galvin asked if the restrictions in fire support were policy, the battalion commander said the political environment in Afghanistan was “too politically sensitive” and that he was “willing to sacrifice the lives of these Marines for the greater good,” according to the board's findings.

The battalion commander relieved Galvin, who said he “could not be responsible for ordering Marines to needlessly die,” according to the board, which found that Galvin “rightfully took a moral stand” by challenging the lieutenant colonel, who decided to “needlessly expose Marines and Afghan civilians to injury and death.”

“The Board concluded the adverse fitness report from Lt. Col. H was an unprofessional and unjustifiable response to being challenged about his tactical decisions which placed Marine lives at grave risk on 6 June 2011 and, as such, should be removed from Petitioner's OMPF ,” according to the Jan. 2 decision.

Galvin's attorney Raymond Toney said the board's decision was unusually in depth and detailed for a correction of records request.

“Basically, it's a clean scrub of his record,” Toney told Task & Purpose on Monday. “Normally, when you read a favorable decision, it's very hard to tell even what the case is about. There may be a sentence or two describing what the issues that were raised. In the past, they assiduously avoided providing the level of detail that they did in this case. My impression is the board wanted to set the record straight with this decision.”

WATCH NEXT: A-10 Strafes Taliban Vehicle In Kandahar