Nearly 10 years ago, the men of Marine Special Operations Company Foxtrot survived an ambush during an operation in Nangarhar... 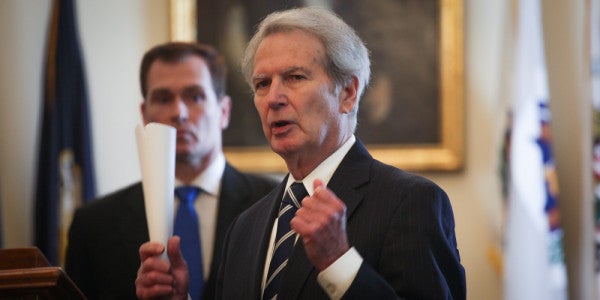 Nearly 10 years ago, the men of Marine Special Operations Company Foxtrot survived an ambush during an operation in Nangarhar province near the Afghanistan-Pakistan border. Though every Marine survived the March 4, 2007 attack, they went on to suffer immensely, beginning with their immediate expulsion from Afghanistan amid unproven claims that they wantonly killed as many as two dozen civilians.

Disgraced and outcast by their own leadership, many of the Marines suffered psychologically, personally, and professionally from the backlash they faced while the military attempted to charge and imprison them — all over erroneous claims that they killed innocent civilians. Though ultimately cleared of wrongdoing in 2008, for many, their careers had been ruined and reputations damaged beyond repair due to persistent rumors that linger to this day.

“In 2007, we were unfairly biased in the press,” said Galvin during a Feb. 16 press conference in Washington, D.C. “It’s been 10 years almost since that’s happened and to have other congressmen who have fought in combat and to join with Congressman Jones and support us in declaring — through the commandant of the Marine Corps — that these Marines did what was right.”

Related: These Congressmen Are Fighting To Clear Names Of Marines Abandoned By The Corps »

Jones has been an advocate for Fox Company since 2007. In early January, he introduced a resolution that would require Marine Corps Commandant Gen. Robert Neller to publicly exonerate the members of Fox Company, stating they “were not at fault in the firefight” and “deserve to have their names cleared.”

“These Marines will be old one day as I am,” Jones said during the press conference. “They need to be vindicated today, not 14 years from now, that’s what this is all about. Honesty and integrity. War is hell. I’ve never been there, but when you hear stories like this, you know that the war-fighter needs to be given the benefit of the doubt.”

Joining Jones are representatives Ruben Gallego, an Arizona Democrat, Democrat Seth Moulton of Massachusetts, and Duncan Hunter, a Republican from California, all three of whom are post-9/11 Marine Corps combat veterans.

Congressman Ruben Gallego and Walter Jones speak to reporters during a press conference at the Cannon House Office Building in Washington, D.C. on Feb. 16, 2017.Task & Purpose photo by James Clark.

“I know how scary and confusing war can be, but there’s nothing more scary and confusing than when your honor is called into question and that’s exactly what happened to Fox Company on March 4th and it was unfortunate,” said Gallego, who co-sponsored the bill with Jones. “There should have been some breathing room, some time given to have the opportunity for a proper investigation before anybody jumped to conclusions.”

The Marine Corps has remained mostly quiet on this, appearing to consider it a closed matter after the 2008 court case cleared the Marines of wrongdoing, notes Military Times’ Andrew deGrandpre who has covered this story extensively.

“The Marine Corps stands by the 2008 decision of then-commander of U.S. Marine Forces Central Command, Lt. Gen. Samuel Helland, who reviewed the findings of a court of inquiry and concluded that, as it relates to the March 4, 2007, attack, the MSOC-F Marines acted appropriately and in accordance with the rules of engagement, and the tactics, techniques and procedures in place at the time in response to a complex attack,” reads a statement from a commandant spokesperson that was issued to Military Times in a Feb. 15 article.

For Galvin and the congressmen there that day, it’s not enough to refer back to the court’s decision. They want the Marine Corps to publicly acknowledge that it made a mistake.

“Why is it this commandant’s responsibility to change anything,” Galvin asked. “The answer to that is any position I’ve served in, it doesn’t make a difference if it’s your fault or not, if something’s wrong, you’re a Marine and you fix it. That’s what we’re obligated to do as officers. To fix the problem.”