Due to the high washout rates at its sniper school, the Marine Corps is facing a “critical gap” in its... 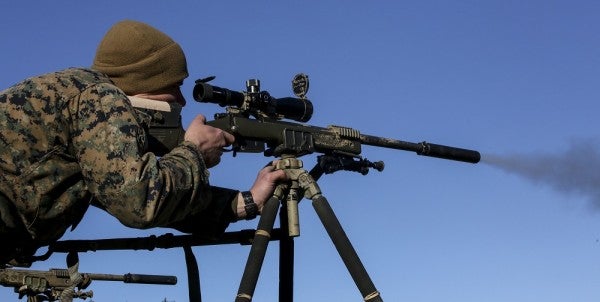 Due to the high washout rates at its sniper school, the Marine Corps is facing a “critical gap” in its number of trained snipers and is mulling changes to the training that could reduce attrition, according to Marine Corps Times.

The graduation rate for the Corps’ Scout Sniper Basic Course has been down for the last several years, and while 2016 saw a bump in graduations — 44% of the class made it through — that’s still well below the 56% graduation rate of 2012. Most students have trouble with the practical application evaluations, like stalking, marksmanship, and land navigation, reports Marine Corps Times.

To make matters worse, many scout snipers who do graduate are nearing the end of their first enlistment and end up getting out. For those who stay, once they achieve the rank of staff sergeant, their MOS designation changes to “infantry unit leader,” and they can be sent to any unit the service deems necessary — needs of the Marine Corps, right? — leading to fewer seasoned snipers and a loss of institutional knowledge in the scout sniper community.

In order to increase graduation rates and raw numbers of scout snipers, the Marine Corps plans to break the school into two parts. In between the two sections, the students will be sent to an operational battalion, where they can receive mentorship from senior Marines who already graduated the course before returning to complete sniper school.

“The intent is to give a sniper student the basic skills they need to join their unit under seasoned scout snipers,” a Marine Corps official told Marine Corps Times. “Then they will be doing out in the operating environments and doing certain skills, holding certain billets at a lower level in their teams to gain that experience.” That regimen, the official added, would give sniper students a greater chance of success.

Not many details of the experiment, which is slated to begin in the spring, have been hammered out yet, including how many students will participate and what benchmarks they’d need to meet before moving on to the second half of the course.

Currently, the Scout Sniper Basic Course involves a three week indoctrination and a 79-day long training regimen, but by breaking the course in two with a period of on the job training and mentorship at a battalion in between, the overall training will be lengthened.

There are also rumblings that top Marine Corps officials are mulling a decision to make scout sniper a primary MOS, which would allow Marines to enlist directly into the role, instead of being selected by their commanders before attending the school.

Such proposed changes may solve the manpower problem, but other concerns simmer in the sniper community. Among them is the call for a new rifle to replace the standard issue M40 sniper rifle, which Marine snipers have criticized for its limited range.

“It doesn’t matter if we have the best training,” a Marine sniper told the Washington Post’s TM Gibbons-Neff, a former Marine infantryman, in a June 2015 report about the rifle’s issues. “If we get picked off at a thousand yards before we can shoot, then what’s the point?”