5 Things I Learned From The Marine Corps’ Scout Sniper School

There is no shortage of popular culture lionizing snipers. From movies to books, legendary exploits are laced with evocative imagery.... 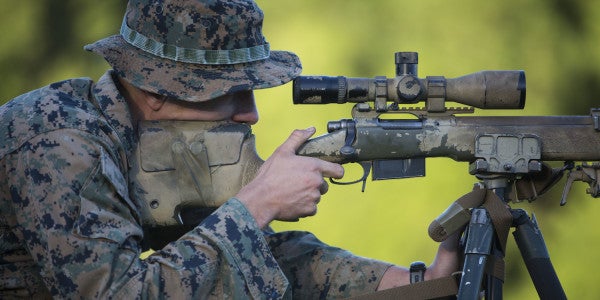 There is no shortage of popular culture lionizing snipers. From movies to books, legendary exploits are laced with evocative imagery. Alone, unafraid, heroically holding back enemy hoards with only a bolt gun. This captivation is not without good cause, but Hollywood’s depictions often fall short of capturing what it truly means to be a sniper. Those hard lessons learned from the Marine Corps’ Scout Sniper School have been ones that have profoundly changed who I am and stayed with me for life.

Brilliance in the basics. In the military, firepower is everything, but often there is a common misconception about what that means. Most think that increasing firepower means to increase the number of rounds per minute. Snipers believe that increasing firepower means increasing the number of hits per minute. With this infectious mentality, accuracy becomes supreme. “One shot, one kill.” In this way, a single sniper could feasibly provide more ‘firepower’ than a squad of machine gunners. It is no surprise that accuracy is the cornerstone for snipers, but it is attained by adhering to a simple maxim: “brilliance in the basics.” By mastering the seemingly simplistic fundamentals of marksmanship, snipers effectively change the battlefield. Snipers offer a long-range precision that prevents enemies from being shielded by distance or imprecise area weapons. It is profound that something so minor found in ‘the basics’ can change the way warfare is conducted. The same way this logic applies to the battlefield it applies to the classroom, office, or wherever you might find yourself. Mastering the basics changes the game making you more effective.

Dedication. Many service members are professionals — clean rooms, inspection-ready uniforms, excelling at their day jobs. Sniper school students don’t aspire to a mere occupation, to be a scout sniper is a way of life. The job doesn’t end with the fallout of formation or weekend liberty; it is brought home and lived. In the evenings at the barracks, snipers can be found studying the physics of ballistics, adjusting their gear until it is perfectly balanced or hand-sewing patches in their ghillie suits. Discussions of techniques in fieldcraft are shared over meals and debates about guns, optics and tactics rage into the nights. This dedication extends throughout the sniper community. The ‘community’ is an abstraction, with only about 300 active duty scout snipers, it is a small circle where everyone knows everyone else, separated only by a degree or two at most. This community makes it easier to remain sharply focused and dedicated to the craft. Sniper school taught me that the level of dedication necessary to master any vocation requires actively living it.

Independence. Scout snipers’ missions require them to be in unforgiving combat environments, miles away from friendly support, in a team of only two to four people. The safety of the team entirely depends on remaining undetected. Leaving any trace is known as a ‘target indicator,’ and considered to be a cardinal sin. Committing this grievous offense required a penance that included hours of retribution, a combination of pain and repeatedly reciting the definition of a target indicator verbatim. While remaining undetected, snipers literally stalk the enemy like a wild predator tracking its prey. Half of sniper school is dedicated to stalking. Students must identify the target, stealthily creep into a position, setup and take two shots on seasoned instructor snipers who are actively searching for them. Relying on no one but themselves, the stakes are high. Being spotted equates to failure and perfect scores are required to graduate. The course teaches what it’s like to be alone and unafraid in an intimate way, fostering a fierce independence in every scout sniper. Independence is invaluable outside of the military, allowing leaders to rise and entrepreneurs to innovate.

Preparation. Every morning during sniper school, students are required to be ready to shoot on a range as soon as the sun is rising and there is enough light to see. On average, students wake up two hours before sunrise for formation, to draw weapons and ammunition, move to a rifle range, and set up a shooting position before first light. We survived through preparation. Everything was prepared the night before to take the least amount of time getting ready the next morning. After all, every minute of preparation yielded another that could be spent on precious sleep. Our uniforms and equipment painstakingly laid out so as to not forget anything, rucksacks inventoried and packed the night before. Camouflage face paint was put on before ever stepping outside our barracks rooms. This preparation bred success, and was the antithesis of procrastination.

Resilience. Often in the world of sniper school mistakes were made, and they were always paid for in sweat. One afternoon in the early weeks of school I had the unfortunate luck of gaining the lead instructor’s attention. His favorite form of punishment was making us ‘touch the tree line,’ which involved running across an open field in full uniform to the edge of a forest a thousand meters away and back. As I arrived after paying for one mistake, panting, flushed with sweat, exhausted, under this instructor’s increased scrutiny, I made another mistake and had to touch the treeline again. The problem was, the more exhausted I became the more mistakes I made. In the span of an hour I had touched the tree line six times. I was smoked. My exhaustion persisted along with the instructor’s berating. Before the end of the day I had lost my survival kit, a crucial piece of gear and a massive target indicator. Instead of spending my night recovering, I had to produce a hand written 10-page paper by the next day about target indicators with a thousand copies of the definition.

I was never closer to quitting anything in my life than that next morning. With sore muscles, fatigue from sleepless writing, misery from a previous day long of scolding, and the anticipation of the painful penance for my target indicators. I’m not sure anyone has ever hated anything as much as I hated that instructor. Despite my contempt, to this day I am eternally grateful for the resilience he taught me. Many things in life cannot be truly understood until they are experienced. Resiliency is no different; you can’t bounce back without getting broken down in the first place. Learning to not let myself be ruled by blunders and shortcomings allowed me to gain a valuable perspective viewing my mistakes not as failures, but opportunities to learn. After all, a wise mentor and fellow sniper once told me, “We learn more from the misses than we do the hits.”