Despite Response To Recent Tragedies, Military Accidents Have Always Been Common

More than 40 American service members have died or are presumed dead due to non-combat accidents since May, raising concerns... 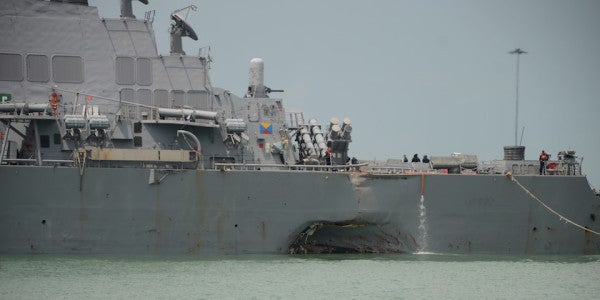 More than 40 American service members have died or are presumed dead due to non-combat accidents since May, raising concerns that the military is on the brink of what one Illinois congressman called a “readiness crisis,” according toCNN.

Politicians and journalists are now pointing to the recent spike in major non-combat incidents and fatalities as possible evidence that budget cuts and an increased operations tempo have rendered the military less effective; although, in doing so, they seem to be overlooking the fact that military service is, and always has been, a pretty hazardous job.

Ten sailors are dead or missing after the USS John S. McCain of the Navy’s 7th Fleet collided with an oil tanker on Aug. 21. Seven other sailors were killed recently when the USS Fitzgerald, also of the 7th Fleet, collided with a large container ship off the coast of Japan in June. The Navy has now suffered a total of four major mishaps involving ships in the Pacific this year.

Why are so many troops dying off the battlefield? That was the question CNN posed in the headline of avideo segment on military readiness, which was published online Aug. 24. “What’s going on?” host Jake Tapper asks in the video. “Is it our equipment? Our weapons? Are we providing sufficient training?” By the time the segment is over, we have no reason to believe the answer isn’t all of the above.

“We can keep disciplining some of these bad officers, we can go and change our training manuals, our operational manuals about how to avoid these type of situations, but at the end of the day we need to have a military that is fed, trained, and ready to go, and we’re not doing that right now,” Arizona Democratic representative and Marine Corps veteran Ruben Gallego told CNN. “Everyone is trying to live off this magic dollar that somehow gets stretched, and it’s just not happening anymore.”

Complaints about military readiness are nothing new, nor are they unfounded. Military officials have been sounding the alarm since the Budget Control Act of 2011 was signed into law, slashing $487 billion from projected defense spending over the following decade. Critics argue that the budget cuts have compounded the strain of 16 years of steady warfare. And there’s plenty of evidence they can point to.

“The competitive advantage that the United States military has long enjoyed is eroding,” Chairman of the Joint Chiefs Gen. Joe Dunford said at a Senate Armed Services Committee hearing in June.

As CNN notes, all of the branches have voiced concerns about deficiencies in training and maintenance following a recent spate of fatal and non-fatal training mishaps involving military aircraft that have resulted in billions of dollars worth of damages. Meanwhile, the Navy says that more than half of its aircraft are inoperable, and the Air Force is currently short upward of 1,500 pilots.

The Arleigh Burke-class guided-missile destroyer USS Fitzgerald (DDG 62) sits in Dry Dock 4 at Fleet Activities Yokosuka to continue repairs and assess damage sustained from its June 17 collision with a merchant vessel. This view shows damage above the waterline to the outside skin of the ship.U.S. Navy photo

“I think it’s probably approaching a readiness crisis,” Rep. Adam Kinzinger, an Illinois Republican who serves in the Air National Guard, told CNN. “You have, in many cases, a Navy that is highly operational and may not get the time or the chance to train as deeply or as much as they want. You have old equipment. You have failing equipment because it’s not being repaired or invested in. These are all concerns when it comes to this.”

All of that might be true; however, it’s difficult to find a period in recent history when military accidents weren’t common.

In fact, several months before the Sept. 11 attacks kicked off the War on Terror, ABC News published an article entitled U.S. Military Accidents Are Common. The story, published in 2001, was pegged to an accident during a live-fire training accident in Kuwait that left six military personnel, including four American soldiers and an airman, dead. They were killed by a 500-bomb dropped by a U.S. Navy pilot.

That incident was preceded by a series of “Class A Mishaps — defined as accidents in which there is a death, permanent disability, or more than $1 million in damage — involving military aircraft that killed a total of 20 service members between Oct. 2000 and before the errant bomb strike in March 2001,” according to the ABC article.

“It’s difficult to draw meaningful trends using military accident statistics for several months, or even year-to-year,” wrote the author of the ABC article. “The military may go for months without a mishap causing a large number of deaths or injuries. And then a transport aircraft might go down killing 19, as occurred last April in another Osprey accident.”

The defense budget is also still significantly higher than it was in 2001, thanks to the War on Terror. And the Trump administration intends to boost the defense budget to $603 billion in fiscal year 2018, while U.S. lawmakers have proposed increasing it more. The additional money would be used to buy more aircraft and ships, as well as recruit more troops.

The House is now pushing for more new Naval ships than the Trump administration requested, according to CNN. The recent tragedies may increase the chances of them achieving their goal.

“This is a time when the services, if you will, want to put their worst foot forward and make clear all the problems that are there,” former Obama administration Defense Department comptroller Robert Hale said in February at a D.C. forum on military readiness. “I think we need to be a little skeptical.”