It started with a knock at the door and ended with a 62-year-old Marine veteran standing in his living room,... 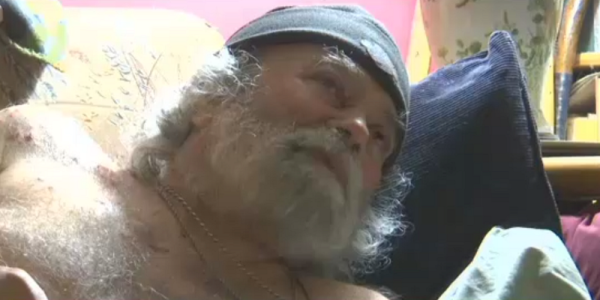 It started with a knock at the door and ended with a 62-year-old Marine veteran standing in his living room, injured and bewildered but alive.

On the evening of June 22, Michael Irving answered the front door of his home in Theodore, Alabama, and was immediately greeted by three would-be burglars and a shotgun blast at point-blank range.

“I walked right here to open the door, and that's when he shot me right there,” Irving told a local Fox News affiliate on June 23.

Related: This Is What Happens When You Try To Rob A Former US Army Paratrooper »

The Plexiglass frame, installed after a previous burglary when robbers made off with his cancer medication, according to a local Fox News affiliate, likely saved Irving’s life. “Where the bullet hole is, you can see how thick that glass is and that's what saved me, because it slowed down the buckshot enough,” he told Fox News

But after the initial shot, instincts, honed during his time in the Corps, took over.

“They cut loose on me and that's when I went to the cabinet here and back behind the coffee was an old time pistol,” Irving said “I opened the door and smoked 'em.”

Irving, who’s been battling colon cancer for the last two years, shot all three intruders on the spot. But he didn’t want anyone to die — himself, or the burglars.

Two of the suspects fled, leaving one of their cohorts behind, but they were arrested soon after at a nearby Dollar General store two miles away, according to Fox News. All three were taken to the hospital for medical care, and then arrested. Police are still searching for a fourth suspect, believed to be the getaway driver.

As for Irving, he’s being hailed as a hero. But Irving says his survival came down to his training in the military.

“I learned that in the Marine Corps — ‘react and do’ before you get scared,” Irving said.