Just hours before the KC-130 crash that claimed the lives of 15 Marines and a sailor in Mississippi on June... 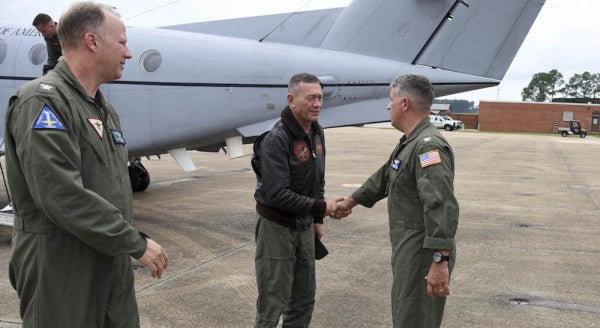 Just hours before the KC-130 crash that claimed the lives of 15 Marines and a sailor in Mississippi on June 10, the retiring three-star general in charge of Marine Corps aviation published a farewell letter stressing the need to bolster the service’s aviation readiness — and saying the Corps needed more, and better-trained, aircraft maintainers.

Lt. Gen. Jon Davis wrote the letter as a reflection on his 37-year military career in Marine aircraft. He has served since 2014 as the deputy commandant for aviation, amid Budget Control Act sequestration, decreased pilot retention, and reduced flight hours.

After taking command of the Corps’ air assets three years ago, Davis wrote, he initiated readiness reviews of five of the service’s key air platforms. “A key finding common to all of these reviews,” he wrote, “emphasized the importance of retaining highly qualified enlisted maintainers.”

Each report “discovered a lack of Marines possessing the requisite skills our ready force demands, causing us to reestablish and increase our benchmarks,” he wrote. But he cautioned that the problem wasn’t with the Marines working in squadrons today: “This is less an issue of individual capability and is more strictly related to density of personnel.”

Aviation mishaps continue to plague the Corps. The Marines had nine major aircraft crashes, resulting in 14 fatalities and 11 lost aircraft, between February 2016 and February 2017, Military.com reported. And the Naval Safety Center saw seven Class A Marine aviation mishaps — incidents that involve a fatality, loss of aircraft, or $2 million in damages — since October 2016 alone.

Davis has been outspoken about these issues for years.

“Average aircrew flight time has reached historic lows,” Davis testified in a House Armed Services Committee hearing on aviation readiness in July 2016. “Every lost day, every missed hour, is missed experience this nation depends upon in the future.”

But just as Davis’ tenure came to a close this week, the Marine Corps experienced its worst aviation disaster in a decade, when the KC-130 Hercules transporting personnel and equipment from Marine Corps Air Station Cherry Point in North Carolina to Naval Air Facility El Centro in California exploded in mid-air over Mississippi.

“The KC-130 has one of the lowest mishap rates of all Marine Corps aircraft,” Marine Corps spokeswoman Capt. Sarah Burns said in a statement. “Over the past 15 years, there have been only three Class A Flight Mishaps involving all Marine Corps models of the C-130, including the crash on July 10th. In 2002 there was a mishap in Pakistan which resulted in 7 deaths and a mishap in California with no fatalities.”

Clearly, something has changed.

“Fixing the problem requires both tracking the qualifications and retention of these enlisted maintenance leaders,” Davis wrote. “We cannot get to the finish line without the hard work and dedication from each and every Marine and Sailor who continue to work tirelessly to keep our aircraft safe and flying and their families who continue to show love and support when it is needed most.”