On Saturday evening, the Marine Corps stated it had suspended search-and-rescue operations for three Marines involved in the MV-22 Osprey mishap... 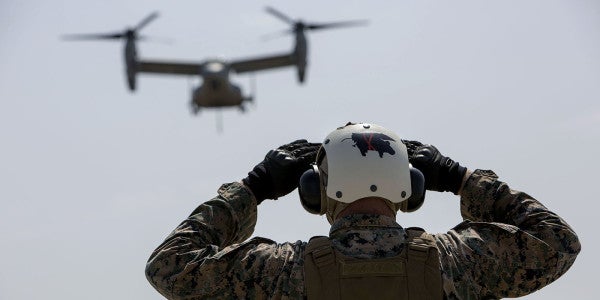 On Saturday evening, the Marine Corps stated it had suspended search-and-rescue operations for three Marines involved in the MV-22 Osprey mishap off the coast of Australia.

A Marine Corps MV-22 Osprey attempting to land on an amphibious ship crashed in the southeast Pacific on Aug. 5, sending its 26 occupants into the water. Twenty-three of the 26 occupants were rescued. By Saturday evening, the Corps released a statement saying operations looking for the three Marines had shifted to recovery efforts.

“As the sea state permits, recovery efforts will be conducted to further search, assess and survey the area, in coordination and with assistance from the Australian Defence Force,” the Marine Corps said in a statement. “Recovery and salvage operations can take several months to complete, but can be extended based on several environmental factors.”

Please keep these families in your thoughts and prayers during this difficult time. All other personnel are accounted for and safe.

The aircraft, which was participating in a joint Australia-U.S. exercise, “had launched from the USS Bonhomme Richard (LHD 6) and was conducting regularly-scheduled operations when it crashed into the waters on its final approach to the USS Green Bay at 2:07 a.m. ET,” according to NBC News.

The MV-22 Osprey, the naval service's first helicopter/propeller aircraft hybrid, has a reputation for mishaps through its service history. Saturday's crash came on the heels of a tragic C-130 crash in Mississippi last month, killing 15 Marines and a Navy corpsman.

As of February, the Corps had lost at least 14 Marines and 11 aircraft in 9 crashes in the past year, spurring some veterans to suggest the service improve its oversight of pilot skills-maintenance.

Task & Purpose will continue to update this story as we learn more.