Nearly two years since a report found evidence that the Marine Corps’ MV-22B Osprey was not mission ready due to... 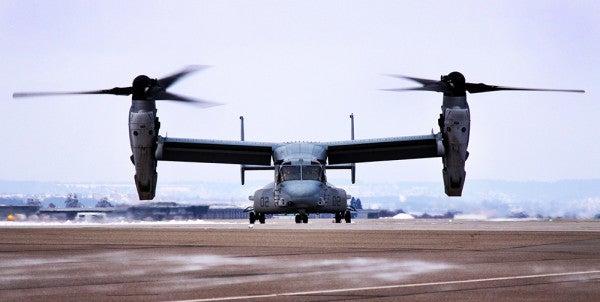 Nearly two years since a report found evidence that the Marine Corps’ MV-22B Osprey was not mission ready due to a high operational tempo, the Corps has made significant efforts to try to turn that around. In 2013, a classified report from the Defense Department Inspector General found that the ready status of the Ospreys at six squadrons was being reported incorrectly the majority of the time. The report also found that readiness for the Osprey ranged from 45 to 58% from 2009 to 2011.

Since that time, the Marine Corps has introduced policies and training aimed at improving record keeping and maintenance training, said Maj. Paul Greenberg, a spokesman for Marine aviation at the Pentagon. From July 2014 to June 2015, the Osprey’s mission-capable rate has increased to 62% for stateside aircraft and 71% for deployed squadrons.

“We have confidence in the professionalism of our Marine pilots and maintainers, but realize there is always room for improvement,” Greenberg told Marine Corps Times. “A major component of improvement is enhancing our aviation maintenance training, to include better record keeping.”