Maybe they should call it an... Uber Cobra? 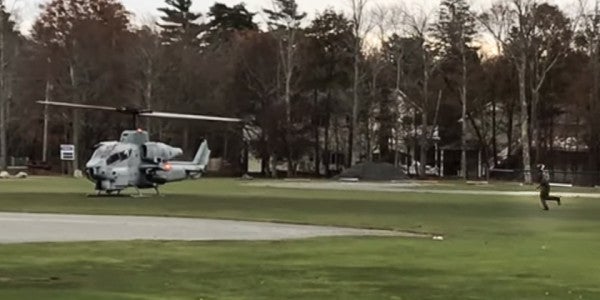 “Gear accountability” is a long-standing maxim in the military, and it was probably on the mind of one Marine attack-helicopter pilot when he made an unorthodox landing on Nov. 18 in a public park on Mount Desert Island, Maine, to pick up his lost cellphone.

Jess Witherell, a server at The Thirsty Whale pub, located in the town of Bar Harbor, on the northern side of the island, received an unusual phone call from Hancock Airport in nearby Trenton, according to the Mount Desert Islander. After a group of Marines visited the restaurant for lunch earlier in the day, one of them apparently misplaced their cell phone — and the caller was wondering if a pub employee could pop on over to the nearest stretch of green to drop it off.

When Witherell asked if the Marine would be walking or driving, the caller responded: “We’re landing a helicopter at the ball field.”

For most folks, that’d probably raise some eyebrows, but the staff figured that the helicopter crewman who lost the phone belonged to LifeFlight, an air ambulance service used by the island for evacuations in the case of medical emergencies, according to the Mount Desert Islander. But when pub dishwasher Bryce Lambert arrived at the field, there wasn’t an air ambulance waiting for him, but a AH-1W Super Cobra attack helicopter with a UH-1Y Venom circling overhead.

One of the pilots ran from the helo, met up with Lambert and, in exchange for his phone, “pulled the patch off of his jacket and handed it ” to say thanks, Lambert told the Islander.

The impromptu landing, while likely entertaining to many, is currently under investigation by the Marine Corps. The aviators belonged to Marine Light Attack Helicopter Squadron 773, a New Orleans-based reserve unit, and were in the area for a training exercise, according to Maj. Andrew Aranda, a spokesman with Marine Corps Forces Reserve Public Affairs.

That said, an unexpected trip to a baseball field in an attack helicopter is probably less of a nightmare for a unit commander than having to explain why there’s a phallus-shaped smoke trail in the sky. As for why the aviators decided not to drive? The airport is a half hour’s journey to The Thirsty Whale, Popular Mechanics reports. But by helo, that’s just a few minutes. Maybe instead of a Super Cobra, they should call it an Uber Cobra.