If the U.S. actually goes back to war with North Korea, American troops are going to need a uniform that... 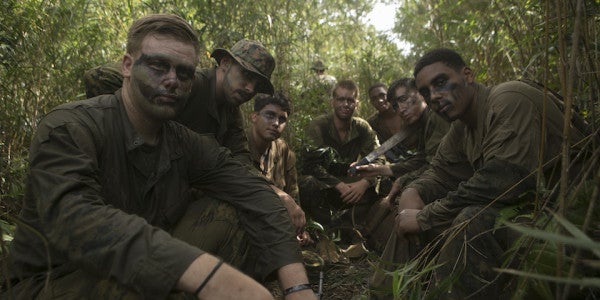 If the U.S. actually goes back to war with North Korea, American troops are going to need a uniform that is lightweight, breathable, and provides adequate camouflage in the forest, complete with a solid pair of boots for humping up and down all of those big mountains. Fortunately for Marines, the Corps has been working hard to ensure they’ll have both.

Lt. Col. Christopher Madeline of Marine Corps Systems Command told Marine Corps Times on Dec. 9 that tropical uniforms and boots should be available starting in late 2018. Members of the 3rd Battalion, 3rd Marines began testing several prototypes more than a year ago in Oahu, Hawaii — and the reviews are stellar.

“They used terms like: ‘fast drying,’ ‘lightweight,’ ‘felt like pajamas,’” Madeline, program manager for infantry combat equipment, told Marine Corps Times. “Those are all good words to meet what we want with that tropical uniform.”

The winning prototype is 30% lighter than the Marine Corps Combat Utility Uniform, according to MCSC. Even better: the elbow, knee, and groin areas are reinforced with slightly heavier fabric to “provide higher abrasion resistance.” This should come as great news to anyone who has ever climbed over a wall in Iraq or Afghanistan and then had to spend the rest of the patrol with their junk fully exposed.

Boots by Danner, Bates, and Rock Boots are also undergoing testing to determine which is most deserving to adorn the feet of Marines. All three models are equipped with a self-cleaning outsole and dry faster than the boots Marines currently wear. They are also, according to MCSC, a half pound to one pound lighter than the current boot, and also substantially lighter when wet.

Madeline told Marine Corps Times that the Corps is now toying with the idea of allowing any of the three boots to be worn by Marines. Everyone wins!

The tropical uniform and boots will not be “seabag items,” which is what sailors and Marines call the stuff they’re required to have. Instead, they’ll be optional: Troops preparing to deploy to a tropical war zone like North Korea will be able to pick up a few pairs at their nearest individual issue facility or post exchange.

(We recommend also picking up some underwear while you’re at it — you know, just in case. There’s going to be a lot of climbing out there.)

The Marine Corps’ new uniforms are part of a bigger push to better equip soldiers for war in the Pacific theater. Earlier this year, the Army announced that it will begin fielding its new Improved Hot Weather Combat Uniform to soldiers in Hawaii in January. The IHWCU is lighter and more breathable than what soldiers wear now, and will be in the new Operational Camouflage Pattern, or OCP, which resembles Multicam.

“January 2018 is going to be huge,” Capt. Daniel Ferenczy, assistant manager for the Army’s Extreme Weather Clothing and Footwear department, told Military.com in August. “They are going to be in the OCP with jungle boots in a hot weather combat uniform.”

We can’t wait to see all the selfies.