Reflections On What The Marine Corps Really Thinks Of Women

I read a book excerpt last week written by Lt. Col. Kate Germano (Ret.) with great interest since she described... 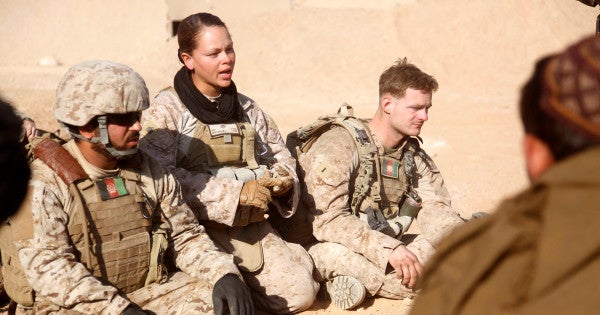 I read a book excerpt last week written by Lt. Col. Kate Germano (Ret.) with great interest since she described her uphill battle to try and make changes to the Marine Corps’ only female basic training unit, the 4th Recruit Training Battalion.

She wrote of the challenges within the mostly-female unit and how she dealt with peers and subordinates. But what I’d like to do here is peel back a layer in a much larger story: what the Marine Corps, and more specifically, the infantry, really thinks of women.

My views come from an infantry-centric experience, but Marine leaders like to say the infantry is the backbone of the Corps, with all others supporting its mission to locate, close with, and destroy the enemy. The infantry sets the example for the rest of the Corps to follow.

As Germano wrote of her experience, it’s clear that women are thought of as second-class citizens at the Corps’ boot camp on Parris Island. But I believe this perception extends much deeper than her essay suggests.

I would argue that women are often thought of as second-class Marines (Note that I’m revealing what I think the opinions of others are on this topic, not my own).

It starts at boot camp. As a male Marine getting yelled at and marched around at Parris Island in 2003, I remember many times when drill instructors would compare us to females at 4th Recruit Training Battalion in a negative way — the idea being that, hey recruit, you better hurry up and quit acting like one of those girls.

The 4th Battalion was “nasty” in their eyes — more so than any of the male battalions — a unit comprised of nothing more than WM’s, an acronym meaning woman Marine but widely-known among male Marines as the pejorative walking mattress.

Sometimes, my drill instructors could be spotted cracking a smile when they heard female drill instructors yelling at their own platoons. And since women were trained completely separate from the men, it was easy for us to believe the perception that they are not trained as well as we are.

This formative experience helped shape my views on women in the Corps going forward, which were constantly reinforced by colleagues and leaders alike.

After initial training, I was sent to my infantry unit in Hawaii, where I can’t remember ever seeing a female Marine anywhere close to our barracks, company and battalion areas, or training sites. To be fair, a large part of this was due to infantry at the time not allowing women (something that has changed only recently).

But I believe there is an element here of institutional segregation. In Hawaii, our buildings were on one side of a creek, with non-infantry personnel on the other side. At Camp Pendleton in California, it’s even more striking, with all the infantry units and the school that feeds them located at the far northern end of the base, about 10 miles from non-infantry personnel.

In this setting, it was easy for us to disparage our female colleagues: We called them “wooks,” “sammich makers” and “split tails.” And we learned non-official acronyms such as WM and DBAP, or don’t be a pussy.

The idea of women being the other was universal. For example, my first interaction with my squad leader was to hear him call me and three others a bunch of bitches. This language — and the undertone that women in the Corps are separate and unequal — was the rule, not the exception.

There will always be a level of macho in the testosterone-filled infantry world, but as I reflect now, the insults directed at female Marines often went too far. And this culture that continues to infect the Corps only serves to hurt an institution that needs the talent and skills of women in its ranks.

I write this not to present the best approach to change it, but simply to educate. I doubt many outside the closed community of the Marine infantry — or the senior leaders who never served within it — know much about it.

The first step to fixing a problem is to realize you have one. And the Marine Corps still has this problem, even after the scandal of Marines United. How can this be changed? I’m not sure. The Army has integrated its initial training pipeline, so perhaps it’s time to do the same for the Corps, which is the lone holdout among military branches that still separates its basic training classes by gender.

There are more ideas to be found among people much smarter than me.

And despite wishful thinking from some in the community, female Marines and female infantrymen are here to stay — a reality that will not be reversed since the policy change was spurred by lawsuits. As I told a friend of mine a few years ago, after he complained of females going through Infantry Officer Course, it is our job now to stop fighting a losing battle to exclude women from our ranks.

We should instead be doing everything we can to set them up for success. Because in Iraq, Afghanistan, or wherever the Corps heads to next, that woman may be the person who saves your life.

Don’t you want her to be ready for it?