The Air Force ditched its pantyhose requirement and women are celebrating

'It'll snag on anything ... The worst is when you're getting ready and it tears as you're struggling to put it on.' 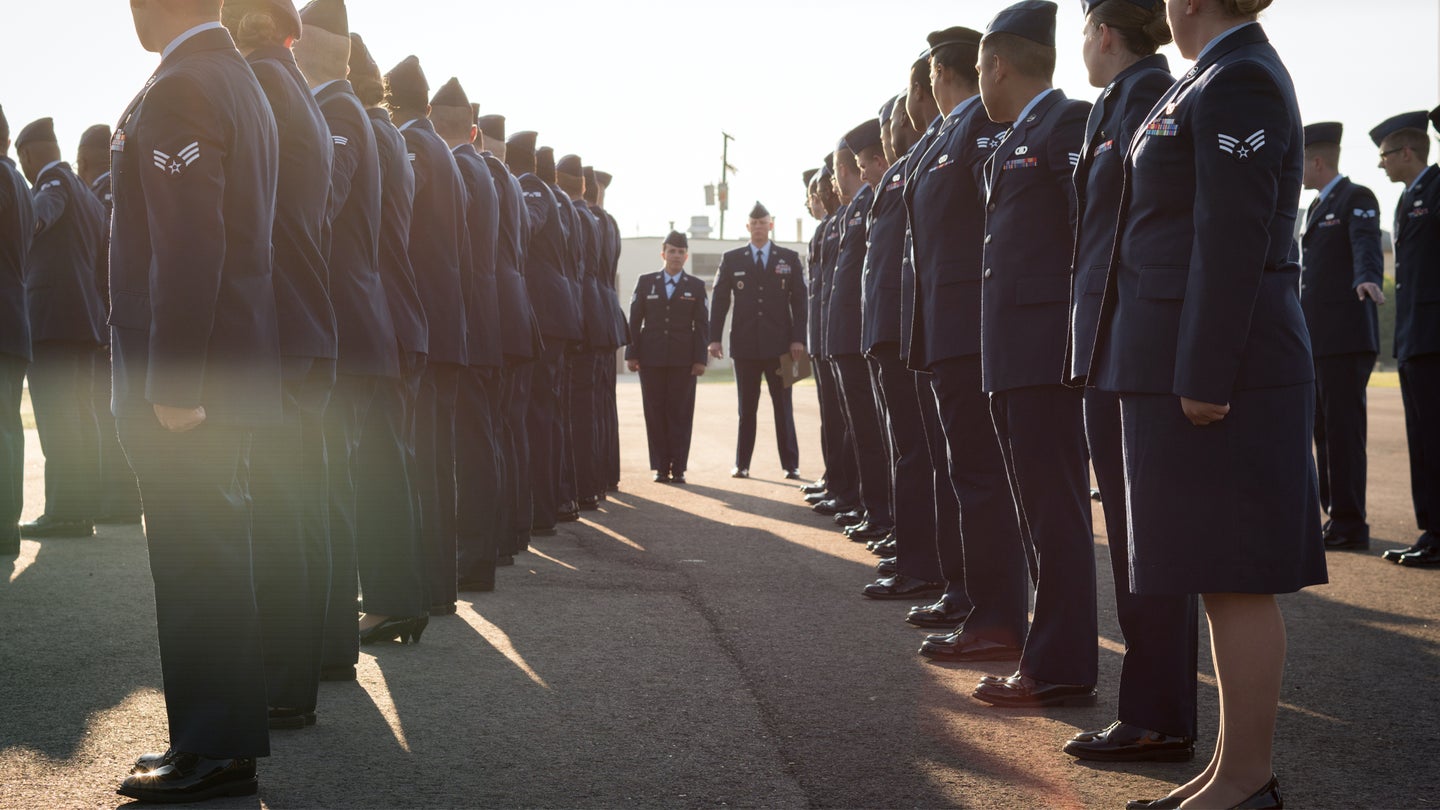 On Tuesday, the Air Force broke with its sister branches by announcing that pantyhose will soon be optional for female airmen wearing skirts in uniform.

For decades, women in the Air Force who wore skirts with their dress blues also had to wear hosiery (i.e. pantyhose) beneath them. The problem is, pantyhose is a hassle to pull on, it tears easily, it’s not very comfortable and it’s largely out of fashion these days. Because pantyhose tears so easily, many women who wear blues to work every day have to replace them often or bring a backup.

“If you’re required to wear pantyhose, you’re trying not to catch them on anything, even the corner of your shoe or your fingernail while you’re putting them on,” one Air Force officer told Task & Purpose on condition of anonymity to speak frankly on the issue.

“The cheapest pantyhose is like $3,” the officer said. “So if you’re wearing them every day, that’s $3 a day just on pantyhose.”

“It’ll snag on just about anything,” she said. “The worst is when you’re getting ready and it tears as you’re struggling to put it on. I’ve tried different brands at different prices and they all seem to tear just the same as the next. Back when I was wearing blues often enough to require hosiery, I was wearing a new pair every time.”

Where did the hosiery requirement come from? It has likely been in place since women first entered the Air Force in 1948. Back then, it was much more conventional for women to wear stockings, since a proper lady “would not be seen in public without her hosiery,” according to Smithsonian Magazine.

When pantyhose was invented in 1959, it made a killing because, unlike stockings, the tight garment went all the way up to the waist and did not require a garter belt or girdle to stay in place.

“By the 1970s and 1980s, pantyhose were a staple in every teen and woman’s wardrobe,” wrote Smithsonian Magazine. “As more women headed into the workplace, sales of pantyhose only grew.”

While the sales of pantyhose grew, so did the number of women serving in the Air Force. The number grew from less than 4,000 in 1948 to 15,021 enlisted in 1973 to 69,458 today, where women comprise 21.3 percent of the Air Force. But while the number of female airmen kept growing, the sales of pantyhose declined along with a shift to a more relaxed dress code in the civilian workplace.

Besides low sales, one sign of pantyhose going out of style was when First Lady Michelle Obama said that “it feels better” not to wear them.

“I stopped wearing pantyhose a long time ago because it was painful and they’d always rip,” she said on the talk show The View in 2008. “It’s just … inconvenient.”

A lot of women seem to agree with her. Even back in 2007, USA Today reported a steady decline in pantyhose sales since 1995.

“I’ve noticed my civilian professional counterparts wear dresses or skirts to work, and no pantyhose,” said the first officer. “That’s just normal now, so I think this is a move to follow along with the business professional look that you see happening in the civilian world.”

“I never wear pantyhose when I’m dressing up in the civilian world,” the officer said on condition of anonymity. Like the others, she was not authorized to speak to the media. “They rip very easily and normally you can only get one or two wears out of them before you have to replace them.”

It’s also stressful worrying about whether they might tear in front of your coworkers and supervisors. “I always wore black [pantyhose] and people can see if it tears,” she said.

On the plus side, few women in the Air Force have to wear dress blues and pantyhose to work every day, especially since the COVID-19 pandemic started. Dress blues are generally reserved for court-martial proceedings, high-level meetings, and attending memorials, the first officer explained. Women also have the option of choosing between skirts and trousers to wear with their dress blues. For everything else, the Operational Camouflage Pattern uniform is sufficient, and you don’t have to wear pantyhose with that.

Still, this change could be a great perk for women who work staff jobs at the Pentagon, for example, where dress blues are a common sight. And making the pantyhose optional allows women who prefer wearing it to keep doing so.

“I spent lots of time in my service dress wearing hosiery (with a back-up pair in my bag) and would probably have continued doing that on duty because I like the way it looks,” said Coretta Gray, a former Air Force lawyer who described herself as “super Southern.”

Wearing pantyhose was not a hardship for Gray, unlike some of the Air Force’s old hair regulations that were found to be medically unsafe. Still, she thinks making hosiery optional “is a positive change.”

“Besides, a lot of hosiery is so sheer that it is hard to tell whether folks are wearing it or not,” she said.

The option also helps out women at Air Force bases in hot states like Texas and Florida, where it’s nice to wear a skirt instead of trousers to keep cool.

“Not only are they not as fashionable anymore, they’re just not comfortable,” said the staff sergeant. “I’m stationed in a hotter climate and hosiery just adds another layer to an already suffocating uniform material.”

Making hosiery optional is one of several recent changes the Air Force has made to make itself more livable for women. Another big one came in January, when the service allowed female airmen to wear longer braids, ponytails and bangs. The reason for changing the regulation was because the previous tight hair bun standards had resulted in migraines, hair damage and hair loss.

“We remain committed to maintaining an iterative approach with our dress and appearance standards,” Air Force Lt. Gen. Brian Kelly, deputy chief of staff for manpower, personnel and services, said in a statement. “During this most recent review we approved several updates fully aligned with our Air Force standards and culture that maintain our focus on warfighting while providing options to meet many of the needs of our Airmen.”

The second officer put it even more succinctly.

The Air Force “is trying to make things more comfortable and accommodating for women,” she said. “They’re liberating the leg.”