Personnel at Joint Base Andrews were treated to a threat brief regarding an "increase in nationwide activity" by self-described "incels." 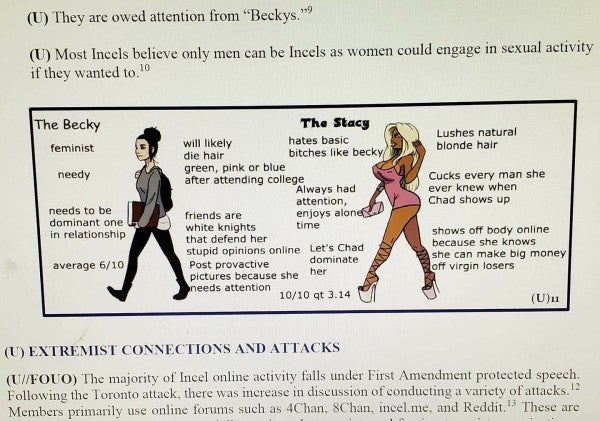 A screenshot from a Joint Base Andrews Intel brief distributed to personnel. (Air Force amn/nco/snco/Facebook)
SHARE

At least one Air Force base is on the lookout for a sinister new threat: angry men who can’t get laid.

Personnel at Joint Base Andrews in Maryland were recently treated to a threat brief regarding an “increase in nationwide activity” by self-described “incels,” members of an online subculture of “involuntary celibacy” who adopt an ideology of misogyny, mistrust of women, and violence in response to their failed attempts at romantic relationships.

The brief was first made public via a screenshot posted to the popular Air Force amn/nco/snco Facebook page on Tuesday. An Air Force spokesman confirmed the authenticity of the screenshot to Task & Purpose.

“The screenshot was taken from a Joint Base Andrews Intel brief created following basic threat analysis on an increase in nationwide activity by the group,” 11th Wing spokesman Aletha Frost told Task & Purpose in an email.

Several mass casualty events apparently tied to the incel movement have occurred with relative frequency in recent years starting in May 2014, when 22-year-old Elliot Rodger shot and killed six women in Isla Vista, California in “retribution” for years of romantic rejection that he detailed in a twisted, vengeful manifesto.

Indeed, the screenshot appeared the day after Brian Isaack Clyde, a former Army infantryman who frequently posted memes that referenced the incel movement alongside anti-government conspiracies to his Facebook page, was shot by federal officers after he opened fire outside a Dallas, Texas federal building.

The screenshot features a reproduction of an internet meme popular among incels known as “Becky vs. Stacy.” A derivative of the ‘Virgin Walk‘ or ‘Virgin vs. Chad‘ meme that contrasts awkward virgin incels against an imaginary hyper-masculine bro known as Chad, the Becky vs. Stacy meme purportedly reflects how incels judge women based solely on their physical features.

Incels believe “they are owned attention from ‘Beckys,'” the Joint Base Andrews brief reads. “Most Incels believe only men can be Incels as women could engage in sexual activity if they wanted to.”

According to the Dallas Morning News, one of the many incel memes Clyde shared included one he referring to “virgin shooting” vs. a “Chad rampage” — yet another derivative of the ‘Virgin Walk’ meme featured in the Joint Base Andrews brief.

While Frost did not elaborate on the specifics surrounding the purported “increase in nationwide activity” that prompted the threat brief, the screenshot cites an “increase in discussion” on popular online forums like Reddit and 4Chan that followed the April 2018 van attack in Toronto that left 10 dead at the hands of 25-year-old Alek Minassian, who lauded Rodger as a hero and claimed on Facebook that he wanted to incite a “incel rebellion.”

“The intent of the brief was to educate the Joint Base Andrews commanders on the behaviors and activities attributed to the group to safeguard our Airmen/installation,” Frost told Task & Purpose.

The following November, 40-year-old Scott Beierle shot and killed two women in a Tallahassee, Florida yoga studio. A former Army second lieutenant, he was discharged for “unacceptable conduct” that involved “inappropriate contact with female soldiers,” according to a Washington Post investigation.

Beierle “was an avowed hater of women, a man who repeatedly grabbed women in real life and fantasized about raping and killing them in the horrific collection of lyrics, poetry and novels he began writing as a teenager,” according to the investigation. “His interactions with the opposite sex had gotten him fired from teaching jobs, booted from the Army and hauled before the principal of his high school

Then, in January 2019, 27-year-old Christopher Wayne Cleary was arrested on terrorism charges following social media posts threatening a mass shooting over his virginity. “I’m planning on shooting up a public place soon and being the next mass shooter cause I’m ready to die and all the girls the turned me down is going to make it right by killing as many girls as I see,” he wrote on Facebook.

It is unclear at this time where the request for the Joint Base Andrews incel threat brief originated, or if other units in the Air Force or other services have received similar briefings. Follow-up questions to the 11th Wing received no response.